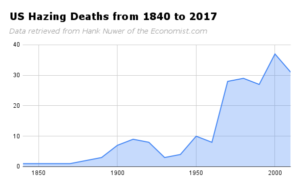 Photo by Beverly Xu, data from Hank Nuwer of the Economist.com
From 1840 to 2017, the number of US hazing deaths has shot up exponentially.

In June, three former fraternity brothers were sentenced to

The practice of hazing is seen as a rite of passage by many Greek-letter organizations, reinforcing established power structures. But these traditions are too often out of control: Hazing and rampant alcoholism in frats and sororities need to be significantly reduced.

Since the 1980s, the number of deaths due to hazing has more than doubled. Following increasing demand by students to end Greek life, universities such as West Virginia University and Howard University have placed stricter regulations on fraternities and sororities, such as requiring a 2.75 GPA for entrance and spot checks by staff members or university police officers.

On the other hand, limitations imposed by universities can be ineffective and even exacerbate the issue of hazing. Many Greek life chapters, including all four sororities at Harvard, and a majority of USC fraternities, responded by disassociating from their colleges, which removes their right to have access to the university’s name, facilities, free access to education about Title IX, sexual assault prevention and drug and alcohol safety resources.

In 2018, five fraternities left West Virginia, as a response to the measures implemented to curb alcohol consumption following a hazing death in 2014. In late August of this year, eight USC fraternities broke away from their school and formed the University Park Interfraternity Council (UPIFC), which promises the same “fraternity experience while promoting peer-governance.” In doing so, they revoked their right to the USC portal, which gives them access to campus regulated clubs, committees and leadership opportunities.

One solution is to restrict alcohol use to prevent the majority of hazing incidents, most of which are alcohol-incited hazing rituals or assaults. In 1997, national fraternity Phi Delta Theta announced new reforms to restrict alcohol in every chapter house across in the U.S. by 2000. Though many said it would hurt the frat house’s chances at attracting new members, the opposite was true, with the number of members growing from 8,500 to 12,000. Furthermore, studies show that the fraternity’s average GPA of student members has increased from 2.7 to 3.1 since the reforms were implemented.

But even then, normal hazing and drinking habits at fraternities pose threats to members — and increasing run-ins with the law. At Yale, where three female students have filed a lawsuit against both the university and its nine fraternities, alleged sexual misconduct on the basis of Title IX is challenging Yale’s greek life institutions. Douglas E. Fierberg, attorney of the Fierberg National Law Group, who has represented multiple school violence victims and works in fraternity litigation, believes that “the law is going to catch up to [Yale and the fraternities.]”

But targeting the root problem, hazing, can help reduce these issues: Creating support systems such as an anonymous report line, using educational outreach to spread awareness, pushing efforts to strengthen criminal penalties and providing ethical alternatives for hazing — such as team building activities — is necessary for the reformation of Greek life organizations. By doing so, students who oppose hazing and Greek life traditions would be more willing to speak up and find a compromising solution.

If Greek life traditions remain the same, campus life will progressively worsen; it’s time for fraternities and sororities to reflect on their practices and take action to ensure the safety of their members. Hazing is an issue that has been unfortunately normalized in frat culture and must be stopped. By changing decades-old values, habits and behaviors over time, we can turn the tides of Greek life’s social culture to create a healthier environment for future students.