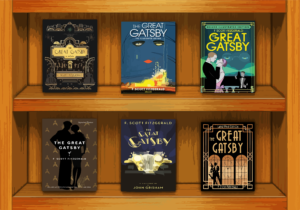 As junior Vignav Ramesh listened to his classmates’ lively debate, he contemplated the prompt, “Is Gatsby really great?” during a Socratic seminar on “The Great Gatsby” in mid-February.

The seven English 11 Honors classes kicked off the spring semester by studying “The Great Gatsby” by F. Scott Fitzgerald, a classic with social commentary on the American Dream. The novel revolves around businessman Nick Carraway, who moves to the extravagant “Eggs” of Long Island where he observes the superficial and morally questionable nature of 1920s aristocracy.

“The plot was intriguing, but what I enjoyed the most about the Great Gatsby was the depth of character development,” Ramesh said. “Seeing American society in the 1920s through Nick Carraway’s constant analysis of Gatsby’s actions was very entertaining.”

The Gatsby curriculum focused on studying the interactions between various characters to draw conclusions on America’s rigid social stratification and the disillusionment surrounding the American Dream. The three English 11 Honors teachers — Marcos Cortez, Amy Keys and Natasha Ritchie — also had students track various motifs such as clothing, money and references to light and color.

“Through studying ‘Gatsby,’ I hope that students grew to understand that divisions within a society are based upon more than socioeconomics,” Cortez said. “The entire idea behind the American Dream — that you’ll make it if you work hard enough — isn’t true. The game is rigged.”

Along with in-class discussions and small-group activities regarding specific chapters and themes, the ‘Gatsby’ unit concluded with a final Socratic seminar in which students shared their perspectives on topics that went beyond the novel.

Compared with previous Socratic seminars from the first semester,  Cortez saw a dramatic increase in the amount of preparedness and insight among his students.

“Doing a Socratic seminar on Zoom is definitely a challenge, but I think the benefits outweigh the difficulties as students get closer to the depth of analysis that I expect,” Cortez said. “It brings ideas out into the world and demands that students are able to articulate their critical thinking.”

To conclude the unit, students responded to a prompt pertaining to American identity and the American Dream in a timed in-class essay. The students were not given the prompts beforehand and had to outline ideas and select text citations quickly.

Cortez said there are significant benefits to the in-class essay, namely that the time crunch of these assessments helps prevent academic dishonesty.

“The skill of meeting a tight deadline goes further than this class and is going to be largely relevant in students’ college and career search,” Cortez said. “I think learning to manage stress in order to be able to think individually and adjust to various circumstances is a lifelong skill.”

Many students valued the “Gatsby” unit because it ventured beyond traditional questions regarding the American Dream and focused on issues such as modern-day class antagonism.

Through a range of outside material such as “America’s ‘We’ Problem” by Robert Reich, which illustrated the danger of wealth consolidation, and “The Great Gatsby and the American Dream” by Sarah Churchill, which revealed the corrupt nature of higher education, the Great Gatsby curriculum provided a multidimensional account of the foundation of American society.

“We see classist practices across the United States, from working class citizens’ inability to vote in presidential elections to the COVID-19’s disproportionate impact on homeless encampments that sit a few miles from the Apple Headquarters,” Ramesh said. “I think these are difficult, sometimes uncomfortable topics that future students need to grapple with.”