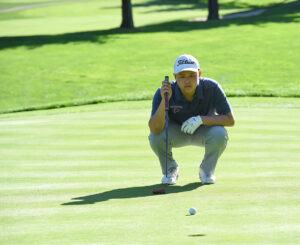 Twin brothers Albert and Geoffrey Jing have been key players on the team this year.

Junior Kevin Sze tapped the golf ball from a foot away with his putter on the 18th hole at El Macero Country Club in Davis. As the ball rolled in, the team cheered as they secured a third-place finish at the NorCal tournament on May 20. Sze finished with a one over par 73.

Not only that, the shot helped qualify the boys team for the state tournament scheduled for May 29 at Poppy Hills Golf Course in Monterey.

The team played a “solid” match, senior Daniel Kraft said, with the six starters scoring at no worse than 77. This consistent play elevated the team over traditional powerhouses Bellarmine and Stevenson, the two teams  the Falcons placed behind them during both rounds of CCS earlier in the month. At NorCal, the team was two strokes ahead of Davis, the fourth place team.

Bellarmine’s team has several experienced seniors who dominated the West Catholic league this year, Sze said. As a result, they routinely qualify for CCS and NorCals. Stevenson is also a talented team that qualifies for the postseason year after year.

Kraft attributes the team’s win to the boys’ ability to step up in the clutch.

“At the last hole, everyone played really well when it mattered,” he said. “It was a pretty narrow par four and the drive was pretty difficult. Most of us hit the fairway and made par which really helped as secure the spot to NorCals.”

The team qualified for the NorCal tournament by placing third at the CCS Finals on May 14. They headed back to Laguna Seca Golf Club a week later to compete for three spots in NorCals, after placing second during the first round of CCS on May 7.

The team was carried by Sze and sophomores Michael Burry and Albert Jing, who played exceptionally well. Sze pulled through with an even par 71, Burry shot a one-over 72 and the boys finished with a total of 376. The score was good enough to place third behind Stevenson and Bellarmine.

“Once we got to NorCals, the expectations got lower a little bit, and we were just trying to have fun,” Kraft said. “Then, we went on to states, which was pretty exciting too.”

On May 7, the team woke up at 5:45 a.m. to embark on the long journey to Laguna Seca Golf Club in Monterey.

After a quick warm-up, Sze officially began the boys’ quest into the postseason with the first round of CCS.

At that moment, Saratoga hung dangerously on the edge of being eliminated.

But as always this year, the team pulled through. Albert shot a solid 73, and Kraft’s 75 solidified the boys’ trip to the CCS final round. Senior William Liu provided the icing on the cake when he walked into the clubhouse and announced he had fired a solid 76.

The boys dropped sophomore Geoffrey Jing’s 77 and their top five scores totaled for 373, only behind Bellarmine College Preparatory and Stevenson School.

With such a deep postseason run, the Falcons have rewritten history for Saratoga golf. Previously, the team had never advanced as a whole tea, past the first round of CCS. However, this year, the talented team smashed all expectations by advancing two steps further, solidifying their status as one of the best teams in the state and even the nation.

“It is exhilarating knowing that we accomplished something others have never done before,” Sze said. “I’m really proud of the team’s efforts this year.”

At the state tournament, the Falcons matched up against Jesuit and De La Salle, the two teams who placed ahead of them at NorCals. They also faced three strong teams from Southern California.

The Falcons have worked hard to prepare for their tough opponents. Kraft said that everyone has been practicing at least two hours a day, and they also went down to Monterey the day before the States tournament for a practice run.

Nonetheless, the boys did not carry lofty goals and were proud of just qualifying for the state tournament together.

“We are just going to have fun,” Kraft said in the days before the match. “If we get last place at states, we are still the sixth-best team in California.”

As for their achievements throughout the entire season, Kraft said, “It was really fun and productive and we exceeded expectations.”