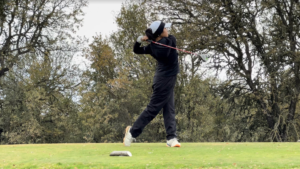 Photo by courtesy of Sarah Lim
Sarah Lim finishes her shot at Hunter Ranch in Paso Robles on Dec. 3.

While many sports like soccer and basketball involve teamwork among players, golf is one of the few that mainly focuses on individual improvement and practice. Sophomore Sarah Lim has played golf for four years, and practices three to four hours most days at San Jose University Spartan Complex. Along with holding the No. 1 position in the school’s girls’ golf team, Lim plays golf competitively: She has placed seventh out of 78 players in the Notah Begay National Championship Louisiana and third out of 19 players in the Mountain View Junior Championship.

Lim grew up an active athlete, having played soccer since she was 6. However, a bad foot injury at age 10 ended her soccer career.

“I was in a tight spot for about five months, when I couldn’t do anything since I couldn’t walk,” Lim said.

Lim’s interest in golf was sparked in sixth grade when her dad invited her to play for fun. She entered her first tournament two years after her dad introduced her to the sport.

“It’s a lot more pressure playing in tournaments, since you have to stay mentally focused for the five to six hours you’re playing,” Lim said.

An extremely technical sport, golf requires tons of repetition and precise coordination. Once Lim practices a shot to the point of perfection, she repeats it at least 20 times in multiple sets to get the muscle memory needed for competitions. She also builds her mental strength through practice, as she constantly receives constructive criticism from her mentors. Often, Lim records her shots on video so she can watch them over with her dad and coach.

With each course around seven to eight miles, Lim keeps in shape to stay focused during the sets by occasionally running once a week. A key factor of staying mentally focused is also making sure she isn’t tired while playing.

Before her practices, Lim often creates a plan on what to work on, such as specific shots she needs to improve. With the long practice hours, she listens to pop music to keep herself focused. Lim finds that keeping a consistent schedule and constantly pushing herself even if she isn’t performing at her best helps her stay motivated.

Typically, Lim’s mom drops her off at the complex and she practices by herself. Lim tries to use time efficiently until the complex closes.

“To make sure I actually practice, it’s helpful to create a plan where I  practice for three hours, rather than [telling myself I’ll] practice from 4 p.m. to 7 p.m.,” Lim said.

Lim also creates a flexible schedule, allowing her to practice almost daily. Since the course is a 30-minute drive from her house, she occasionally practices at home if she needs to prioritize her school work. In her backyard, Lim keeps a golf net for practicing her shots.

When playing at tournaments, Lim gets the “usual jitters,” from the  pressure of performing well, but she has learned to maneuver around the initial nervousness.

“If you can’t control your emotions [during tournaments], your performance will begin to spiral downwards, and it’s really hard to get back up once you get too emotional,” Lim said.

Taking too many shots into a hole or shooting poorly can result in a defeated and frustrated mindset, increasing the likelihood of future missed shots. To prevent this, Lim finds that chatting with other players lessens her stress. Because tournaments are played in groups of three or four, players get to interact with each other. This, along with tournaments spanning over a few days, helps Lim concentrate more during her shots.

“If you don’t do well on the first day, you can always improve throughout. It also causes less stress sometimes, since not all of the pressure is on one day,” Lim said.

With emotional support from her school teammates, Lim says she has become more focused on her shots rather than scared of missing them.

“You can meet a lot of fun and cool people [during tournaments], and you end up seeing them at a lot of competitions,” Lim said.