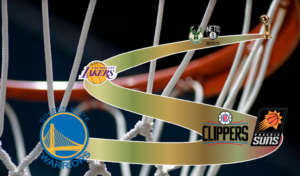 On the night of the NBA Draft on July 29,  fans and analysts wondered how the Golden State Warriors would use their two valuable first round lottery picks (No. 7 and No. 14): Would they trade for a proven star player or use them for the future? There were several rumors floating around, and analysts were drawing up potential trades for players around the league.

Many fans, including me, wanted the Warriors to trade their picks for All-Star players like the Washington Wizards’ Bradley Beal or the Philadelphia 76ers’ Ben Simmons.

With an MVP-caliber player and generational talent in Stephen Curry, one of the best two-way players in Klay Thompson and a defensive player of the year candidate in Draymond Green — all in their 30s and nearing the end of their primes — it only made sense for the Warriors to  trade for another star and go all in for the championship.

After all, the last two NBA champions, the Milwaukee Bucks and the Los Angeles Lakers, both had to give up a multitude of picks in order to get stars Jrue Holiday and Anthony Davis respectively, who both played pivotal roles in elevating each team to their championships.

But that was not what the Warriors decided to do: Instead, they used their picks in the draft to pick up young talents Jonathan Kuminga at No. 7 and Moses Moody at No. 14.

From what we saw in the Summer League, Kuminga and Moody looked to be exciting young players and great picks by the Warriors. However, without trading for another veteran All-Star player, the Warriors may lack the offensive firepower to beat teams like the Lakers and Brooklyn Nets, who have recently made major moves to elevate themselves to top championship contenders. The rookies have the potential to become valuable players — possibly even All-Stars several years down the line — but the big three may decline by the time they do.

Other than these potential trades and the draft, the Warriors had a relatively quiet offseason, especially compared to other favorites like the Los Angeles Lakers. The only major difference from last season is that Thompson will be returning after two years of rehabbing from major leg injuries, elevating the team to an all but certain playoff lock — but not a top championship contender.

Regarding their roster, the Warriors gave Curry a 4-year $215 million max extension until 2026, to no one’s surprise. They lost solid role players in Kelly Oubre and Kent Bazemore in free agency and Nico Mannion to an Italian basketball team, but brought in Otto Porter Jr., Nemanja Bjelica and 37-year-old Warriors legend Andre Iguodala on veteran minimums, which is a slight upgrade.

To me, the most confusing move the front office made was trading Eric Paschall, a proven player who was All-Rookie second Team in the 2019-20 season, to the Utah Jazz for only a protected 2026 second round pick, possibly to free up a bigger role for Kuminga. Paschall, though injury riddled last season and on the last year of his contract, is a proven player who averaged 12.2 points on 49.7% shooting and 4.0 rebounds per game during his two years on the Warriors, showing that he could be a great role player and scorer when needed.

This quiet offseason for the Warriors sharply contrasts with the Lakers’ offseason, who completely switched their supporting cast around LeBron James and Anthony Davis because of their first-round loss last season due to injuries.

After trading for nine-time NBA all star and 2016-17 MVP Russell Westbrook as well as signing veteran shooters like Carmelo Anthony, Wayne Ellington, Bazemore and Trevor Ariza to make up for their perimeter shooting, the Lakers now have only four remaining players from their 2020 championship team. With all the veterans, the Lakers now have the oldest team in the NBA with an average age of 30.9 years old, more than two years more than the next oldest team and more than four years above the league average.

Because of bolder moves like these, I would pick the Nets, Lakers and defending champion Milwaukee Bucks as the top three teams to win the championship over the Warriors, who have elected to keep a roster of younger, less experienced, players. Barring injuries, the Warriors have similar chances as the defending champion Phoenix Suns, Miami Heat, Atlanta Hawks, Denver Nuggets, Utah Jazz and Los Angeles Clippers.

However, with Curry and Thompson, two of the best shooters of all time, the Warriors do have a chance at winning the championship, though a first round exit against an evenly matched team such as the Clippers is also entirely possible. Most likely, the Warriors will be a 3-5 seed in the Western Conference this season.

It’s a shame — instead of keeping the draft picks, the Warriors could and should have used their trade pieces in a package for another star and moved into the upper echelon of championship contending teams.

They had the perfect opportunity to trade for an all-star player by offering desirable, younger players like center James Wiseman as well as the No.7 and 14 picks in possibly the most stacked draft class in recent years. These are assets which would be very valuable for rebuilding teams, especially because Wiseman, the No. 2 pick in the 2020 draft, has the potential to become a star.

The Warriors also have a big contract in Andrew Wiggins, which they could have flipped for another star to bolster offensive production.

The fact that they did not do so signals that the front office is trying to maintain a championship contending team while also building a good team for the future, which is a challenging task considering that the past two NBA champions went all in at the risk of compromising their future.

The other possible reason the Warriors may not have traded the picks was to maintain their defensive core — which now involves Wiggins — and stay as one of the top defensive teams in the NBA.

The two players who were most rumored to be traded to the Warriors were Simmons and Beal.

Simmons is an elite defender, but he was off the table after the 76ers asked for Wiggins, Wiseman, the two 2021 first round picks and two more future first round picks, which would have been a ridiculous overpay. Though Simmons is a valuable asset, he wasn’t necessary since he is a similar player to Green, whose job is to play defense and facilitate the offense.

Recently, however, the chance of Simmons being traded to the Warriors has seemingly been increasing with new reports coming out. Simmons, who has cut off all contact with 76ers players, coaches and managers, will not show up for training camp and “intends to never play another game for the franchise.”

Fans have started speculating that Simmons may be traded to the Warriors for less than what was initially offered, especially with Wiggins’ seeming refusal to get the COVID-19 vaccine, which will prevent him from playing home games because of San Francisco County restrictions. A package involving Wiggins for Simmons is appearing increasingly likely for many fans.

Beal, who was another player rumored to be traded to the Warriors, would have been a great scoring threat and could have drawn double or triple teams away from Curry to give him more space to operate. Last season, Curry constantly faced double, triple and even quadruple teams, but still led the NBA with a career high of 32.0 points per game. Defenses were purposely leaving Curry’s teammates open because they were no significant scoring threat, especially with injuries to role players like Oubre, Damion Lee and Paschall.

The one downside to Beal’s game is that he is not a good defender, which may have been a key reason the Warriors passed on him.

Despite Thompson’s return, new young players, a more developed young cast in Wiseman and the possibility of less injuries this upcoming season, it will still be unlikely for the Warriors to place over other championship contending teams.

Regardless of what happens, I will enjoy watching the team this upcoming season. With the Splash Bros projected to be back on the court together and exciting rookies in Kuminga and Moody, I’m looking forward to the opening night matchup on Oct. 19 of the Warriors vs. the Lakers, a rematch of last season’s epic play-in game.