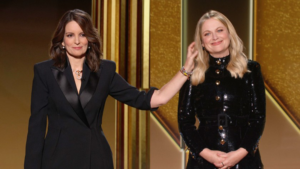 Awards season has returned and, with it, the usual controversy over nominations and snubs. Despite the lack of movie releases over the past year, the Hollywood Foreign Press Association (HFPA) still managed to get their Golden Globes ceremony in the headlines, albeit, not in the best way.

The Globes made some improvements to the Zoom-show format, but the show was ultimately too long, inaccessible and marred by the HFPA’s terrible controversies.

It’s undoubtedly difficult to pull off an awards ceremony in the middle of a pandemic with all the celebrity guests Zoom-ing from their homes. Still, hosts Amy Poehler and Tina Fey delivered a surprisingly funny monologue — from two different locations.

Poehler and Fey’s self-awareness made their jokes refreshing and engaging, but they still paled in comparison to Ricky Gervais’s free-for-all last year. The show also did a good job of inserting comedy bits between all the seriousness, like with Kristen Wiig and Annie Mumolo’s “Barb and Star” cameo.

And while all awards shows are often long and slightly boring, the Globes were made worse by an utterly inaccessible and offensive roster of nominations. Critic darlings like “Judas and the Black Messiah,” a timely film exploring the government’s involvement in Black radicalist Fred Hampton’s death, and Pixar’s “Soul,” an animated film that explored the purpose of life, were snubbed for best picture. Yet Sia’s film “Music, which was criticized for offensive depictions of autistic people, and “Borat: Subsequent Moviefilm,” a distracted film with an overly long runtime, were featured. Thanks to streaming services, at least the TV categories were filled with recognizable shows and actresses — but the Globes are known for movies, not TV.

Worst of all, the entire show was overshadowed by multiple controversies involving the HFPA. The LA Times revealed that the organization misused its money to increase the benefits of its 87 members, none of which are Black. The New York Times also reported that the HFPA and its members were frequently courted by studios and productions, which often resulted in corrupt nominations that baffled critics (like one noted example, Netflix’s “Emily in Paris”).

Granted, the HFPA made an effort to apologize for their misdoings. They promised to be more transparent and add Black members to their organization. They awarded multiple Black actors, a female director and more. These were all surface level amends, however, and did little to distract from the weight of the problems.

The Globes was bashed for its controversies and ridiculed for its missteps, causing its ratings to crash more than 62%. It was a disaster of epic proportions, but that comes as no surprise given awards shows have been on the decline for years.

The failure begs the question: Will the rest of the awards season repeat the same mistakes again, or will Hollywood finally learn?

There’s only one part of that answer that is for sure: The boring show and corrupt nominations of the 2021 Golden Globes should never happen again.