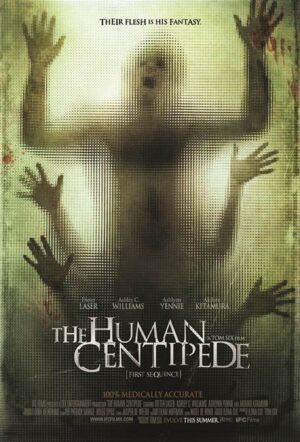 “The Human Centipede” is a grim film series that follows a scientist who stitches people together to form a ‘centipede’, all while forcing them to perform repulsive acts.

Maybe Hollywood needs a little more self-censorship. That sounds a bit radical, I know, but stick with me.

Throughout the 1930s-’40s — right in the middle of what is considered Hollywood’s Golden Age — parents did not have to worry about the violence, nudity or explicit scenes in the film. The content was limited because of the Hays Code of 1934, which ensured that American films were wholesome and morally intact.

As the decades went by, the Motion Picture Association of America (MPAA) pushed for less censorship to give filmmakers more creative freedom. That led to the Hays Code disappearing in 1968, and MPAA creating a new familiar rating system that has evolved into: G, PG, PG-13, R and NC-17.

While some took the new content regulation as an opportunity to make their films more realistic and compelling, other filmmakers decided to include full-blown explicit content in their movies, often knowing it would contribute to box office success but add little or nothing artistically.

Supposedly, proponents of these ratings had great belief in parents’ ability to control what their kids would see. They couldn’t have anticipated all the changes the internet would bring in the 2000s.

And then fast forward to today. On TikTok, for example, advertisements for grim horror movies like “The Green Inferno,” “The Human Centipede” and “A Serbian Film” have been trending.

These films depict extremely graphic images of harming or abusing other characters for another character’s enjoyment, with “no attempt to portray any of the victims in the films as anything other than objects to be brutalized, degraded and mutilated for the amusement and arousal of the central character, as well as for the pleasure of the audience," the British Board of Film Classification (BBFC) said.

The clips traveling around the platform can easily pique younger viewers’ curiosity, leading them to look up the movie and become traumatized by the results. Though people can and always will watch what they want, the looser the regulations become, the harder it will be to control the consequences.

Though the First Amendment guarantees freedom of speech, this freedom does not apply to obscene materials, especially when viewed by children.

Although what material is considered obscene or perverse remains strongly subjective and standards vary from state to state, several films, such as “The Green Inferno” and “A Serbian Film,” unquestionably violate these exact laws.

In fact, the BBFC stated that the “Human Centipede II” may breach the Obscene Publications Act, and "poses a real, as opposed to a fanciful, risk that harm is likely to be caused to potential viewers”.

Yet “The Human Centipede” even has sequels. The warnings to avoid the movie just encouraged people to watch it.

These movies have effects beyond simply disturbing viewers who come across them. Communication theorists, who interpret how individuals convey content and its meaning, have attempted to draw the connections between a person’s behaviors and the harmful media they consume.

The Social Learning theory explores the idea that people will imitate the actions and attitudes of those they see on television or in film. It suggests some viewers can’t easily differentiate between what is seen on the big screen and in real life.

The theory concluded that the media people consume and the environment they surround themselves with play a large part in developing their personality and behavior. This means that people who watch obscene films will have a hard time differentiating between the viewed behavior and the behavior that is actually appropriate in real life.

Take the blockbuster and globally known film “The Wolf of Wall Street,” released in 2013, for example. It’s an incredibly popular film that is mainstream and easy to access, containing excessive profanity. The film has the highest number of swear words in a film with an overwhelming 715 swear words in its 180-minute run. This type of behavior could make people swear more in their daily life.

In contrast, films such as “The Hate U Give,” “Love Simon,” and “Hidden Figures” all have somewhat progressive storylines and teach some real-life moral lessons — all without being unnecessarily graphic or obscene. Why keep creating content with the adverse effects and encouraging others to watch it when society can’t afford any more damaging content being passed around in mainstream media that’s easy to access for everyone?

And according to a survey conducted by Buzzbingo, four out of the five films with the most profanity were released after the year 2000 — showing just how steep the decline in morality has been.

Many filmmakers are abusing their artistic freedom these days and need to be reined in or learn to rein themselves in.

If the film industry begins to change censorship regulations or implement the obscenity regulations they created in the first place, there’s a higher possibility that filmmakers will start creating films with more progressive and meaningful storylines. We as consumers can also shun films we deem too graphic or crude.

This isn’t to say that the film industry is going to become perfect overnight; however, the first step in the process is limiting what is considered mainstream and putting more films under actual review before releasing them to the public.