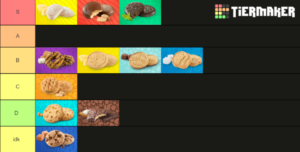 With the passing of Chinese New Year’s and some extra money on hand, we thought that it’d be a great idea to spend upwards of $30 purchasing and rating every type of girl scout cookie we could get our hands on, because why not?

We started off strong with Tagalongs, Andy’s favorite. Consisting of a layer of peanut butter surrounded by a smooth coating of chocolate, this flavorful and crunchy cookie — which helps Girl Scouts with decision making, according to their official website — was an easy decision to make for our best-tasting cookie.

The only downside to Tagalongs is that each $5 box only contains 15, so those looking for quantity over quality should turn to other cookies, like Do-si-dos, instead.

While Do-si-dos, like Tagalongs, are peanut butter flavored, they use oatmeal instead of rich chocolate as an exterior. If you actually like oatmeal, Do-si-dos may be a better option because there are 20 relatively large cookies in each box, but since neither of us is particularly fond of oatmeal, we skipped our box of Do-si-dos in favor of more Tagalongs.

After (too) quickly devouring our supply of Tagalongs, we turned to Samoas to satisfy our still-empty stomachs.

More accurately, Tiffany turned to Samoas to satisfy her empty stomach, citing the cookie’s sweet caramel and coconut combination and how “foods with holes always taste better.” Andy wanted to spit out the singular Samoa he tried.

For Andy, the sweetness of the cookie was too much to handle; one may be fine, but any more is too many.

If you have a sweet tooth, Samoas are probably a perfect fit, but if you’re more in the mood for something sour, try Lemonades instead.

Despite replacing Savannah Smiles, which Girl Scouts removed from circulation two years ago despite their alliterative S-tier status, Lemonades are still a solid choice. Half shortbread and half lemony icing, these cookies pack a satisfying crunch and a tangy punch.

We approached the end of our taste test with Trefoils, which we gave a B-grade for basic, boring but buttery shortbread. We came to the consensus that purchasing a box wasn’t worth $5, but if someone were to offer us a couple of Trefoils, we’d be happy to snack on them.

Saving the best for last, we finally arrived at Thin Mints. Not much needs to be said — with 32 cookies per box and the perfect mix of chocolate and mint flavoring, Thin Mints are undoubtedly the most bang-for-your-buck cookie on the market. Whether eaten plain, with milk or frozen over, Thin Mints are our crowned king of the cookies.

At the end of the day, taste is subjective, so feel free to purchase as many of whichever Girl Scout cookies you want — although we’d highly recommend loading up on Thin Mints and Tagalongs rather than Trefoils. Just make sure to exercise later.