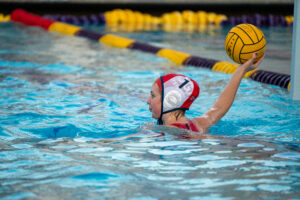 Permalink
With the loss of several players this season, the team is focusing on rebuilding a strong foundation.

The team began the year facing challenges such as the loss of two players to graduation last year and the decision of two seniors, Fiona Feng and Hannah Baniani, not to play this season. The team lost 7-6 in their Sept. 2 scrimmage against Los Gatos and 8-7 in their first game against Monta Vista on Sept. 6, but won 12-3 against Milpitas on Sept. 8 with junior hole set Ryder Gangemi as their main scorer.

Currently, the team has 10 members and has been preparing for the upcoming season under new head coach Mike Allegretti, who also coaches the school’s swim team and played water polo during high school.

“At the beginning of the season, we were unsure if we would even have a coach, so we were really happy when [Allegretti] stepped in,” senior goalie Rosie Kline said.

Under his guidance, the team hopes to improve their performance;  key points of emphasis have been improving conditioning through drills and covering more plays.

In the water, the Falcons have been working on basic skills like driving in, releasing for the ball and 6-on-5 formations during most practices.

Their practices typically start with swim sets and passing techniques. The team has also begun to use weight belts during passing exercises to build strength and stamina.

Despite some early losses and the challenges posed by the loss of several key players, Kline sees room for growth and success.

“I hope that the team has a good time and expands their leadership skills while developing their water polo skills,” she said.