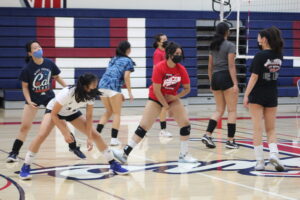 Photo by Sanjoli Gupta
Girls’ volleyball team warms up for their scrimmage against Del Mar.

Recap: The girls’ volleyball team had a successful season last year, even though it was cut short.

Since the former girls’ volleyball coach Brendan Wang resigned to solely coach club volleyball, new head coach Thomas Ching hopes to get the team ready for CCS. As a result of this abrupt change, the team has had to spend time adjusting to Ching’s coaching style and strategies.

“Our new coach has adapted to our program well,” junior co-captain Lisa Fung said. “He has a different style than my previous coaches, but we’re all getting used to it.”

Ching bases his coaching and lineups on performance during practices and scrimmages, both as a player and teammate. He considers respect a necessary value for players, and Ching ensures that his team shows respect and gratitude toward each other, coaches, opponents and referees.

To compensate for the lack of games last year, the team’s practices have become longer and more frequent to prepare for this season. Last year, the team had a shortage of players as a result of the pandemic, but with both returning and new players this year, the team’s chances of qualifying for CCS are looking bright.

On Aug. 28, the team attended a tournament where they finished 2-3, losing games against Carlmont, Castilleja and Santa Clara High, defeating Lincoln and Milpitas High.

“I think we did alright, but we were definitely tired towards the end,” Fung said. “It could’ve been smoother with all the rotations and the lineups, but overall, it was a pretty good first tournament.”

The team is looking forward to their upcoming games against Lynbrook and Cupertino on Sept. 28 and 30. Last season the team lost against both these schools so they hope to win this time. Since the season is normal this year, there will be many exciting matches to look forward to.

“There’s definitely more camaraderie,” Fung said. “More people are excited to play this year because they didn’t really have the chance to play previously. It’s going to be an interesting season.”