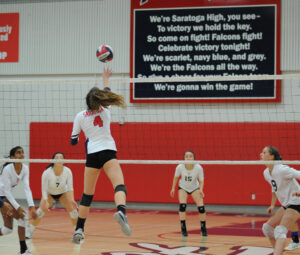 The crowd roared as junior Hermoine Bossolina took on the role of libero and helped lead the Falcons varsity team to victory 3-2 during their home game versus Milpitas on Oct. 8.

After senior captain and libero Lauren Hansen pulled her hamstring in the middle of the game, all hope seemed to be lost. Hansen’s substitute for libero, Jordyn Sin, was also on the sidelines due to a back injury. Finally, as the set score reached 2-2, setter Bossolina stood in for Hansen and played well for them to snatch a win.

The victory gave them a league record of 6-4. The team started the season with issues finding a coach and trying to make up for the loss of key players to graduation, but nearing the heart of their league season, they have maintained a successful record. As the season comes to a close, the team hopes to win in its final two games against Cupertino and Fremont.

The team has endured a barrage of mid-season injuries, including hitter Ria Purisai with a minor concussion, defensive specialist Sin with a back injury, Hansen with a leg injury, and middle blocker Berry Bailey with an ankle injury.

Senior captain Gurneet Jandu has faith that the team will play well despite the obstacles that have stumbled upon in the past few months.

“Going through all these injuries and still fighting through the games is really hard,” Jandu said. “But we’ve pushed through it and all of us had fun at the end of the day. We grew a lot as a team and learned from each other through all the ups and downs.”