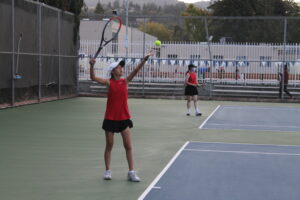 Inspired by her older sister’s example, freshman Megha Horantur, Megha began playing tennis  in the United States Tennis Association (USTA) at age 8. This year, she earned the spot of No. 2 singles player on varsity.

“It’s just having fun and playing matches with the entire team, so we don’t really think about it if someone is a freshman or sophomore,” Horantur said.

She attributes her quick elevation to varsity  to hard work and extra practice: She goes to additional practices with Lu’s Tennis Academy after school.

However, even with key additions such as Horantur, the varsity team is struggling to win matches; many key players either graduated or opted out. The team has only 10 girls instead of the standard 14. The expectation is as COVID cases become less of a concern, the number of players trying out will increase in future years.

The varsity team has a record of 0-6 as of Oct. 7, with losses to Palo Alto, Cupertino, Los Altos, Mountain View, Cupertino and Homestead.

Horantur attributes their record to players being  nervous and out of practice after the pandemic. As the team gets more used to action-packed competitions and becomes more consistent, she believes that the team’s performance will improve significantly.

A typical practice starts with a brief cross-court and down-the-line rally warm up before transitioning into point play. The team’s biggest pain point is their lack of consistency, so they often practice with only half of the court, forcing their shots to land more accurately.

Getting back on the courts has been a smooth process so far, with players bonding and improving as a team.

“I think we’ve got the best school spirit out of all the teams, and all that’s left is the performance,” team captain senior Naisha Agarwal said.