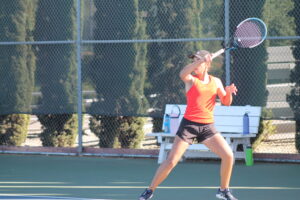 Photo by No. 1 Singles player junior Sabrina Manea playing a game against Lynbrook

The girls’ tennis team ended the season with a record of 11-3 in the El Camino League. The team faced off against multiple schools in the league, including Santa Clara, Lynbrook and Fremont High.

Although they did not qualify for CCS, a portion of the team attended the El Camino Santa Clara Valley Athletic League (SCVAL) tournament, which took place at Fremont High School on Nov. 4.

The players entered in a single-elimination bracket. Singh, Chawla and Lin and Prashanth and Rama lost in the first round. Manea placed No. 3 after going through 4 rounds.

Manea, who lost 2-6, 7-5 and 7-10 against the top ranked player in the league, was proud to do better than previous seasons.

In addition to trying to make CCS next year, she thinks the team could return to the more competitive De Anza division.

“Our goal for this year was to win all our matches and move back up to the De Anza League,” Manea said. “We didn’t achieve that goal, but I think next year we will still have the same goal, and then we hope to make it into CCS as well.”