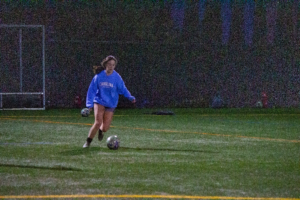 During a 5-1 win against Lynbrook on April 3, senior Michelle Lim, who plays center-back, remembers being red carded for “being in a fight” with a player from the opposing team.

“A girl on the other team was being racist and antagonizing us. She tried to punch me repeatedly during the game,” Lim said. “However, we beat them 4-0 when playing them again during senior night.”

After the girls’ soccer team dropped to the lower league last year, they were able to come back with a very successful season this year. The team had a record of 10-1, losing one game against Wilcox on April 21 and earning first place in the SCVAL-El Camino league. Despite the challenges of a shortened season due to COVID-19, the team was able to prevail. While there were no changes to the way practices were held, the team worked much harder this year, head coach Ben Maxwell said.

“Our group as a whole was made up of better trainers, and [the athletes are] mature enough to balance working hard and enjoying themselves,” he said.

According to Maxwell, the team’s drop to the lower league from last year contributed to the good record. While the team will lose three seniors — including Lim who is committed to play soccer at Wellesley College — to graduation, the team hopes to fill the gaps with the talented underclassmen.

“While you cannot replace what each player has to offer, we can look into what qualities their replacements have and use their skill sets to help the team,” Maxwell said.

One of the key additions of this year is center-back freshman Laurel Sun. After Lim’s three-game suspension, Sun stepped up and played almost every minute of every game, Lim said. Freshman Kate Oberhouser and sophomore Gabi Golko were also key midfielders.

“I was really happy with the season, especially since it was my senior year,” Lim said. “Both seasons that I played in high school were very successful and the team was really driven to win and work hard for everyone else. I was a little hesitant to play at first because club soccer was finally starting up again but I'm really glad that I decided to play.”