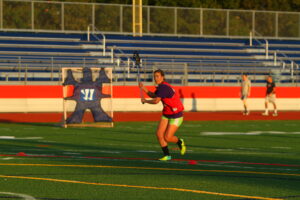 Senior Jennie Werner passes the ball to a teammate at a practice in preparation for CCS.

After beating Los Gatos on May 2 with a score of 12-4, the girls’ lacrosse team has secured a spot in playoffs and are currently seeded fourth in CCS. The team beat Mountain View 14-6 on April 30, and Los Gatos away and at home on April 28 and May 2, with the scores of 20-8 and 12-4, respectively. With a change in tactics, such as a man to man offensive strategy and better communication among defensive players, senior co-captain Lena Jewler believes the team is on the right track toward success in playoffs, which begin on May 12. “We’ve improved significantly since the beginning of the season,” Jewler said. “Our athleticism and new techniques have made a great difference. At this point, we’ve become a very competitive team.” With only a few losses in the season, the girls have either had close games or have won by a significant number. “The close games are always frustrating because we end up losing by so little,” senior co-captain Jennie Werner said. After three months of practices and games, the girls have grown as players and as a family. The team has seen the addition of six new underclassmen players, along with two returning underclassmen. Despite the age differences, the new players feel welcome on the team. Sophomore Maya Kumar, who played on JV last year, found the contrast between JV and varsity to be significant enough that the entire experience of the game is different. “Varsity is much more intense; every drill we do has a purpose and contributes towards the quality of our playing,” Kumar said. “We don’t waste time on drills that aren’t relevant towards defeating our next opponent.” As preparation for the league playoff games, also known as the Santa Clara Valley Athletic League or SCVALS, approaches, the girls are focusing on honing down on specific areas in order to benefit their overall skills. “We’re working to improve the little things that make a huge difference,” Werner said. “Getting the ball off the draw 80 percent of the time rather than 40 percent basically ensures that we will win the game, so we’re trying to work on being more confident in areas like this.”