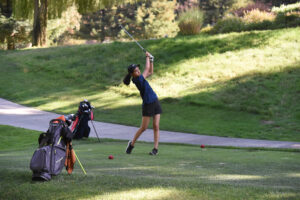 Photo by Now and Forever Studios
Senior Ananya Seth follows through on her swing, and watches the ball fly away from her.

Permalink
After a season led by seniors, the team will have new star players and a restructured travel team.

Recap: Due to increased participation and the travel team being primarily made up of experienced seniors, the team performed better than the 2020-2021 season, despite a similar win-loss record.

Standing on the golf tee at an unfamiliar course recently, sophomore Melanie Lee felt the pressure of taking the next swing. Since no course is exactly the same, she said each round brings an element of surprise, keeping her on her toes.

“Golf is mainly a mental game, so I hope to become more resilient and clear minded as I play,” she said.

After a disappointing season last year, both Lee and senior Ananya Seth are striving to improve the team’s performance.

However, after losing key seniors to graduation, the team has only filled 10 out of 12 spots on the team. They say the travel team, which consists of the six best players, will likely be less competitive than before.

Despite these losses, Seth still believes the girls, led by No. 1 player, sophomore Sarah Lim, can continue to improve the program for the future and have a year they can be proud of.

The team practices Monday through Thursday at Saratoga Country Club. They are training with their new members in preparation for their first match on Sept. 12.

Some new members joining the team include freshmen Millie Wang and Stella Cho, as well as sophomore Lydia Li.

With many new players, the team’s mentality, focus and strength will be tested. Nevertheless, Seth is making sure to enjoy her last year on the team.

“I hope to have a lot of fun this year, since it’s my last,” she said. “Just like last year, I look forward to getting close and bonding with my teammates over golf.”