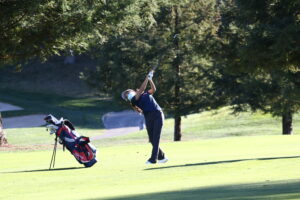 Four matches into the season, the girls’ golf team is 1-3 after a victory over Los Gatos in their first match and losses to Monta Vista, Lynbrook and Palo Alto afterward.

Despite their consecutive losses, the team has steadily improved throughout the season — they scored lower (and thus better) in the three matches that they lost than in their first winning match.

The two most experienced players on the team are senior Jane Loo and junior Savannah Lin, who have scoring averages of 44 and 41 and rank 19th and 13th in the league, respectively. They will make it to league finals as individuals based on their league scoring, coach Dave Gragnola said.

The rest of the travel team includes seniors Ananya Sekharan and Melody Li, junior Harshini Velchamy and freshman Alicia Nguyen.  Their scoring averages are all between 56 and 59.

Despite less experienced members shooting in the 60s in some of the first few matches, their scores have improved and Gragnola likes the progress he has seen. Gragnola has been working with them to improve their sand play, putting and use of the driver.

“I have seen immediate improvement in their scores and expect all of them to shoot in the 50s the rest of the year,” Gragnola said. “I don’t expect this travel team to change much this season.”