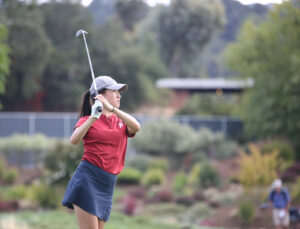 Girls' golf is proud of making it to CCS.

Leaving Saratoga at 5 a.m. on Oct. 30, the seven members of the girls’ golf team made the one and a half hour journey to Laguna Seca Golf Course in the Monterey Peninsula for the one-day CCS tournament — a huge accomplishment for the program.

When they reached the golf course, the sun started to rise as their long day started. Above all, they were just happy to be there.

In the end, they finished seventh out of the 13 teams that qualified. While only the top three teams advance to NorCals, the team enjoyed competing against the top talent in the area..

“The competition was definitely fiercer [than regular season and league matches],” senior captain and No. 1 player Janelle Jin said.

While the girls had to miss a day of school for CCS, it was well worth the experience, sophomore No. 3 player Jane Loo said.

The team played an 18-hole course at Laguna Seca. As the day started, each member of the travel team teed off with two other players, both from a different school and of an equally matched golf merit.

Jin said the team could have performed better at Laguna Seca.

“I know I had a bad day,” she said. “I also know the rest of my teammates didn’t play as well as they could have, but considering even that, I think we did pretty well.”

Even so, the team accomplished a lot this season and worked hard to get there, and Jin was particularly excited to have made CCS after a tough league matches this year and her four strong seasons on the team.

“It’s been a very long time and it just really made my day,” she said.

Reflecting on her last four years playing golf and the team’s season, Jin said, “I’m really proud of how far we got this season.”