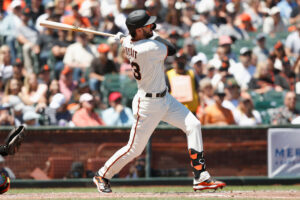 Photo by FanSided
Midseason acquisition Kris Bryant has impressed for the Giants early on.

Prior to the start of the 2021 Major League Baseball (MLB) season, ESPN ranked the San Francisco Giants as the 23rd best team in the league with a projected record of 70-92, with only a 1.2 percent chance of making the playoffs.

The Giants now find themselves neck-and-neck with the rival Los Angeles Dodgers in a race for the top spot in the National League West. In contrast to the Dodgers’ star-studded cast of players and highest payroll in the league, the Giants have battled their way to the top through value signings and unexpected breakout players. Among these “low budget players” are Darin Ruf, LaMonte Wade Jr, Mike Yastrzemski and Austin Slater, all of whom are on contracts of less than $2 million per year.

As of Sept. 5, the Giants now had 86 wins and sat atop the hardest division in the MLB — the NL West, which has the Dodgers and San Diego Padres, two of the most talent-laden teams in the league.

One of the biggest contributors to the Giants’ success has been their starting pitcher Kevin Gausman. Bleacher Report ranked Gausman as just the 20th best ace — a team’s No. 1 pitcher — in the MLB before the 2021 season, but he quickly established himself as one of the league’s best pitchers. Gausman started off hot with a 2.14 ERA in the month of April, and followed it up with an impressive0.73 ERA in May. After another brilliant month in June, Gausman cooled off in July with a 5.11 ERA, but currently has the 5th best ERA out of all pitchers in the MLB.

Gausman isn’t the sole reason for the Giants’ standout pitching this year. Home-grown prospect Logan Webb has established himself as an ace with a 2.84 ERA and 7 wins. Moreover, starting pitchers Anthony DeSclafani and Alex Wood each had 11 and 10 wins respectively. And the no-name bullpen led by Jake McGee and Tyler Rogers has been amazingly solid, despite having little or no fanfare as the year began.

Pitching hasn’t been the only pleasant surprise this year. The Giants are second out of all teams in home runs with 201 so far. Among the main contributors are Yastrzemski with 21, Brandon Belt with 20, Brandon Crawford with 19 and Wade Jr. with 17.

The Giants also acquired outfielder/third baseman Kris Bryant from the struggling Chicago Cubs at the trade deadline in late July. The former National League MVP has recorded six home runs in 28 games for the team. The Giants gave up relatively little in this trade, prompting many to sing the praises of Giants top baseball executive Farhan Zaidi.

In addition to Zaidi, manager Gabe Kapler has proven to be one of the best in the league. After being fired by the Philadelphia Phillies following the 2019 season, Kapler was hired by the Giants in late 2019. In his first season with the Giants, the team overperformed expectations, and they have done so to an even greater extent this year.

Over the summer, Giants fans were also delighted to hear the return of the announcer Duane Kuiper’s iconic home run calls. He has missed dozens of games earlier this season due to chemotherapy as he battles cancer.

Two of the Giants’ heroes from their early 2010s World Series titles, catcher Buster Posey and Crawford, have returned to top form this season, each receiving All-Star honors. Posey’s return is especially impressive given that he missed the 2020 season after opting out due to the COVID-19 pandemic, and few expected him to return to his all-star status.

With the Giants’ unexpectedly successful season so far, fans are hoping that it will continue into the playoffs and bring a fourth World Series title to San Francisco, adding to their trio of memorable titles in 2010, 2012 and 2014.