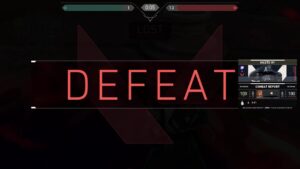 I decided to play “Valorant,” a team-based tactical shooter similar to “Counter Strike,” this break. I used to play “Overwatch” (another team-based first person shooter) when I was 13, so I thought “Valorant” would be a fun transition.

I was wrong. Very wrong.

I’m not hating on “Valorant” — it’s not a bad game. In fact, the game was extremely cool, but only when I was watching “Valorant” streamers hit 360 no-scopes and single-handedly ace the entire enemy team with a pistol. When I played, I did not hit anyone, no-scope or not. As you might expect, I also did not get any kills.

“Valorant” was released by Riot Games last June, and the objective in a round is to either plant a bomb (called a spike) or prevent the enemy team from planting a spike. Each round is two minutes with no respawns. The first team to win 13 rounds wins the match.

While “Overwatch” matches let players respawn infinitely and constantly throw themselves at baddies for short 20-minute games, I ended up dying in the first 10 seconds of each round and spectating as my teammates carried my butt for the majority of my often 40-minute  “Valorant” matches. The game was intensely hard, which I was about to realize is just a good adjective for any game made by Riot.

First off, a lot of my “Overwatch” skills didn’t extend to “Valorant.” For example, in “Overwatch,” you can just hold down the mouse button and consistently hit enemies (especially massive characters like Roadhog and Reinhardt). In “Valorant,” the more you shoot, the more inaccurate your gun gets, and unless you shoot in bursts you’ll miss your targets 99 percent of the time.

My amazing “Overwatch” spray-and-pray tactics with Soldier 76’s infinitely accurate sci-fi machine gun just didn’t translate to a tactical shooter like “Valorant” where the sci-fi machine guns just don’t have the same pizazz. Also, headshots do seemingly 50 times as much damage as body shots, so you actually have to be able to aim.

In my first game, inspired by YouTube gameplay videos, I grabbed a sniper rifle and started firing. For some reason, actual players were much harder to hit than the bots in the tutorial. I then tried out a machine gun, but after shooting at someone for a solid five seconds the player just turned around and shot me in the head with his pistol, killing me instantly. I hit him exactly once in those five seconds, and sadly it was in the shin.

I had a little more success with shotguns since they did massive damage with minimal aiming skills on my part. The main problem was that they required you to get close to your opponent and believe me, that’s a big problem in a game where you can’t sprint. You ironically can slow yourself down (to quiet your footsteps), but you absolutely cannot speed yourself up. Ultimately, I just ended up camping in corners hoping my prey would come to me, which sadly only worked on defense.

Despite my subpar performance, I was still hooked for some reason. I grinded unranked mode, planting spikes, missing headshots and dashing around as Jett for two hours every day during break.

You would think that I would have improved after the first week. I thought so too, but after finally unlocking competitive mode, I promptly got placed into Iron 2, dropped down to Iron 3 (which, for reference, is the lowest possible rank) and proceeded to consistently get near the bottom of the leaderboard each time.

After around five competitive games, I finally decided that I was not bad at “Valorant” — “Valorant” was just bad at letting me play it. But giving up on “Valorant” left a bad taste in my mouth. How could Riot Games beat me up like this? So, I decided I would apply my video gaming prowess to a more welcoming game, “League of Legends,” a Multiplayer Online Battle Arena (MOBA) game where teams of champions fight to destroy the other teams’ base.

A lot of my friends played, so after dying eight times in my first game back from my 2-year hiatus, I got them to carry me to victory. As much as I enjoyed cheerleading my friends as they stomped under-leveled opponents, it still felt pretty bad that I kept getting a D- grade after each game. My parents would have been disappointed. I recently started playing a bit more on my own, but it has been a rocky ride of getting killed by monsters in the jungle of Summoner’s Rift and realizing that I should probably start buying items.

Riot Games, thank you for giving me something to do during winter break. But at the same time, please tone down the difficulty. Or at least add Iron 4 to “Valorant” so I won’t be in the lowest division anymore.