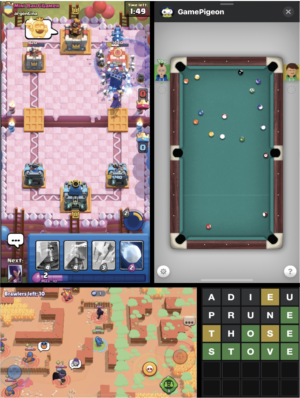 Permalink
Playing “Clash Royale” and “Wordle” definitely is not the smartest way to utilize those 40 minutes, but they’re awfully fun

The 40-minute tutorials every Blue Day grant students valuable time to catch up on schoolwork and meet with teachers. Yet more often than not, students are unproductive, walking aimlessly through the hallways and scrolling away on their phones.

So, to the students who prefer to do everything but study, here’s a list of the best mobile games to play with your friends in lieu of finishing your English essay that’s due next period.

First up on the list is “Clash Royale” a free-to-play, multiplayer strategy game released in 2016. Despite being an older game, “Clash Royale” remains immensely popular because of frequent updates and open-ended strategy.

To put it simply, the primary objective of “Clash Royale” is to destroy the opponent’s King Tower for an instantaneous victory. In order to do so, players utilize a wide variety of cards including mobile attack units such as Hog Rider, while placing stationary tower defenses like the Inferno Tower.

By winning matches, players gain trophies, which move them further up the “trophy road” to collect milestone rewards including cards of higher rarity and gold, the in-game currency.

Additionally, “Clash Royale” offers multiple game modes, with the simplest being 1v1 and 2v2. Players can form online clans with friends and compete against rival clans to earn rewards and clan trophies.

Sophomore Marco Wang began his “Clash Royale” journey starting in September 2021 and has since achieved a ranking of Challenger II in Arena 15, one of the highest possible levels in the game.

“I immediately became hooked because of the adrenaline the game provides. Matches are short, capped at five minutes long, so everything is very fast-paced and exciting,” Wang said.

Wang also mentioned the endless variety of tactics available, where players can draw from a pool of 103 different cards to formulate their own strategies.

Because of the game’s multiplayer design along with the short 5-minute matches, “Clash Royale” is the perfect game to play with a partner, and definitely deserves a spot on your phone’s home screen.

Next up on our list is “Brawl Stars,” a fun fast-paced multiplayer third-person shooter. Offering intensity-packed gameplay and a multitude of champs to choose from, it’s no question why “Brawl Stars” is often seen as the success to “Clash Royale.”

In “Brawl Stars,” players are given the option to choose from  a variety of characters known as “Brawlers” which each include distinctive attacking abilities and a “super,” a special attack that a player can access by dealing damage to opponents.

“Brawl Stars” reinvents multiplayer gameplay by featuring multiple game modes centered around 3v3 team battles, such as gem grab, where two teams fight it out to be the first to collect 10 gems. Other modes include Showdown, where 10 players are pitted against each other and fight each other to be the last one standing within a shrinking arena.

Senior Enoch Jung said that one great aspect of “Brawl Stars” is the group-centric model, which encourages players to team up with friends.

“Playing ‘Brawl Stars’ with people you know really brings the game to a whole new level because you can utilize the advantage of communication while forming bonds with friends at the same time,” Jung said.

Jung added that “Brawl Stars” utilizes skill-based matchmaking, where players are pitted against opponents with the same number of trophies, allowing the game to be fair and balanced for all players.

“Brawl Stars” surely is one for the books, being one of the best mobile games of all time. By combining fantastic gameplay within a diverse game structure, “Brawl Stars” is perfect for new players while also providing new content for veterans thanks to Supercell’s frequent updating.

“Anyone can play, it’s super easy to learn. The fast-paced gameplay along with the fact that it’s on mobile means you can play whenever you want with whoever you want,” Jung said.

Another popular addition to our list is “GamePigeon,” an arcade of games that can be added as an extension on iMessage; popular game modes include “Word Hunt,” “Golf,” “Darts and Archery.”

Unlike traditional mobile games, “GamePigeon” functions on a text message model where players can send game invites to friends over instant messaging.

Sophomore Christopher You, a hearty “GamePigeon” enthusiast with a 300-win record to his name, enjoys the wide variety of game modes that suit every mobile gamer.

“There are just so many game modes. If you don’t like Archery, you can practice your vocabulary in Word Hunt” You said.

Part of the success of “GamePigeon” is its ability to reinvent classic games, such as chess, to an online format, allowing players to play on their handheld devices rather than lugging an unwieldy chessboard around.

Additionally, because “GamePigeon” is an extension to iMessage, rather than an actual app, it effectively provides a loophole for students with parental restrictions on games.

“Wordle”, known across the internet by its signature gray, yellow and green boxes, has captivated the attention of millions online, meteorically rising to the top of online gaming.

Similar to a typical newspaper’s crossword, there’s only one puzzle available each day, so once a user solves the daily “Wordle,” they have to wait for the next.

Considering the simple nature of the game, how is it that “Wordle” has become one of the biggest hits in 2022? The answer is partly due to the ability to share results across social media. Conversation threads have bloomed on Twitter as avid players discuss strategy and results.

Sophomore Madeline Hung, a daily “Wordle” player, often researches the best strategies for solving the puzzles in the least number of tries.

“Statistically speaking, the strongest starting word is ‘Adieu’ given that it contains four vowels in five letters, which in turn helps eliminate the most common letters and bring you closer to the answer,” Hung said.

So next time you find yourself wasting time during tutorial, try downloading one of the games on this list. We guarantee you’ll have loads of fun with your friends, and a slight chance of missing fourth period.