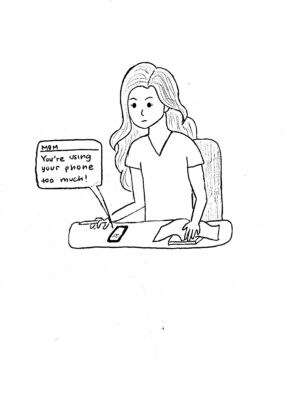 Since almost birth, Generation Zers have lived with phones and tablets. It is hardly a surprise that many of us are addicted to them..

Many older generations accuse our generation of the incessant usage of phones — an apparent addiction that supposedly weakens social skills and intelligence. But is this really our fault? We’ve grown up in an age filled to the brim with technology — we know nothing else.

Previous generations have also grown up with new technologies. It would seem disingenuous to blame the Baby Boomers for being “addicted” to cars or TV and being physically less fit as a result of less walking or biking. Screen usage is no different: just as cars are utterly woven into daily life, so are phones and tablets and smartwatches.

Technology not only improves our understanding of worldly events through constant media coverage, but it also connects us socially with others from long distances. Many times, students need to use technology for school, as many assignments and projects are given through online platforms.

Technology has also allowed information to be at our fingertips and made us more educated and knowledgeable about the world around us. These capabilities have arisen only because of phones, and our generation has taken this chance to become well-educated human beings.

Furthermore, while older generations criticize Generation Z for being on our phones too much, the same can be said about themselves. Many times, parents will have a higher weekly screen time than their children. If parents and older generations care so much about phone usage, then they set an example and start the change by changing their own screen times.

It is not just a problem for Generation Z, however much of the blame has been put on us because we grew up in the age of technology. As the world is becoming more technologically advanced, people will obviously use their phones and laptops more; teenagers shouldn’t be the ones at fault for that.

Using phones and devices more is not necessarily a bad thing — they can be very useful — it is just a matter of being able to balance the screen time with education or work purposes versus using them just for fun. All generations should be more mindful of what they use their phones for, but Generation Z shouldn’t be criticized for how we were raised.