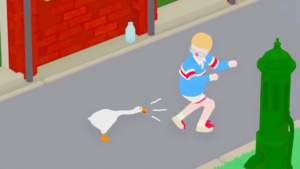 Stealthily eliminating high-profile targets as a contract assassin in “Hitman 2” or stealing from wealthy oligarchs as a Greek mercenary in “Assassin’s Creed: Odyssey” is all good fun, but the experience pales in comparison to annoying humans as a naughty goose in the “Untitled Goose Game,” a stealth puzzle game by House House that runs on PC, Mac and Nintendo Switch.

Instead of the typical run-and-gun playstyle of many popular games, Untitled Goose Game employs hilarious and engaging puzzles like stealing a gardener’s hat from his head or getting broadcasted on national television.

When I first jumped into the game on my PC, I didn’t expect much. I was used to the nonstop action of shooter games and MOBAs like Overwatch and League of Legends. When the game told me to “have a picnic,” I felt pretty cheated. I paid $20 to have a picnic?

It turned out, however, that stealing a pumpkin for my picnic was a lot harder than it seemed. Not only was the gardener, whose pumpkin I was stealing, always chasing after me, but the pumpkins were also essentially the same size as my goose and moving them was a pretty slow process. After a little bit of thinking, I sent my goose to turn on a sprinkler. While the farmer walked over to turn it off, I snatched the pumpkin and made a run for my picnic blanket.

Soon, I was fully in goose mode. I stole the gardener’s hat (which took quite a bit of ingenuity), made him hammer his thumb by honking at the right moment and stole a kid’s glasses. I was still hooked two hours later when I locked a storekeeper in her garage.

Ultimately, the game blew away a lot of my expectations. The puzzles, although seemingly simple, forced me to think outside of the box. There are only a few controls that can be used to complete tasks: walk, run, crouch, honk and flap wings. I was genuinely stumped by a couple of the puzzles, but once I was able to complete them, the result often had me chuckling to myself.

Untitled Goose Game is easily worth the $20 it costs, with its completely unique gameplay and its amazing entertainment value. Honestly, they should have just called it the Ultimate Goose Game.