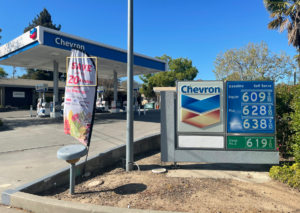 Prices for regular gasoline at the Chevron in Los Gatos on Saratoga-Los Gatos Road break $6.

Permalink
The Saratoga community sees various degrees of impact on their daily lives due to price spiking as part of sanctions placed on Russia during their invasion of Ukraine.

Like many Americans, senior Raina Hirekatur has seen her pocketbook hit hard in recent weeks at the gas pump as prices have spiked due to the Russian invasion of Ukraine on Feb. 24.

“I’ve definitely had to be more conservative in how much gas I consume and ensure every trip is as efficient as possible,” Hirekatur said.

Gasoline prices in the U.S. have seen a dramatic increase in conjunction with the invasion, topping $6 a gallon at some local stations. That is up from an average of $3.36 a gallon nationally in January, according to the American Automobile Association (AAA).

Russia, the third-largest oil exporter after the U.S. and Saudi Arabia, accounts for over 10% of oil production in the world and supplies around one-third of Europe’s oil. In response to the invasion, European countries cut back their purchases of Russian oil in protest. The U.S. also banned imported Russian oil in an effort to “target the main artery of Russia’s economy,” according to President Joe Biden in his March 8 speech announcing the U.S. ban on imports of Russian oil, liquefied natural gas and coal. These stipulations make oil supplies scarcer across the globe.

Europe is now scrambling to find oil from alternative producers like America and Organization of the Petroleum Exporting Countries (OPEC), a cartel of 23 major oil producing countries. This polarizes worldwide demand and spikes gas prices internationally. California’s stringent laws on emissions as well as gasoline taxing result in its prices reaching unprecedented heights with an average $5.91 per gallon of regular gasoline as of March 30, according to the AAA.

Though she does not pay for her own gas, Hirekatur’s family has placed strict rules on their collective consumption in response to such high prices, especially as gas prices surpass $6. She said that while she aims to drive only for necessities, there are situations in which driving cannot be compromised.

“Many activities every day as a high schooler require some sort of transportation,” Hirekatur said. “I can’t compromise driving even with the gas prices. We just have to try our best to be as resourceful as possible.”

Other students, such as junior Alexander Lee, feel relatively unaffected by these extreme prices, which he attributes to how infrequently he drives his Acura TL.

“I typically only drive to commute to school. Since I drive so little, one tank goes a very long way,” Lee said.

Lee noted that such high prices are less harmful in wealthy cities like Saratoga compared to less affluent communities, where gasoline is a requirement for employment such as truck driving and ridesharing.

Lee understands the concern behind raising gas prices, especially for those who are more financially restricted in other areas of the state.

“[These] prices are definitely unhealthily high, and no one should have to pay such amounts. It’s hard to predict when prices will settle down since they’re very dependent on the current crisis in Ukraine,” Lee said.

Since pandemic restrictions are loosening, many professions are assimilating back into in-person work that require employees to commute. In a place with high housing costs like Saratoga, teachers are particularly affected, as many of them live in other cities. The soaring gas prices marked a clear uptick in their bills as they commute from places like San Jose and Santa Cruz.

Media Arts Program and AP Art History teacher Joel Tarbox lives in Santa Cruz, and said that he has seen a noticeable increase in bills — from roughly $40 to $60 — to fill up his Toyota Camry each week. Since the invasion, Tarbox has been hearing discussions that the situation is a result of political manipulations and feels that the theory is unwarranted and provoking.

“There’s a propensity in America that somehow recent political actions deliberately create economic upheavals,” Tarbox said. “I hear phrases like, ‘It’s the president’s fault that gas prices are increased.’ The reality is that these are the laws of supply and demand. There is less fuel, so prices will increase.”

Like many others, Tarbox sees increased gas costs as a small price to pay for curbing Russian aggression.

“I definitely don’t like current gas prices and how uncomfortable they are,” Tarbox said. “But for what it’s worth, I would rather pay these prices than support what the Russian government is doing to Ukraine.”