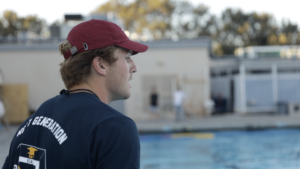 Permalink
After a successful season in his senior year, boys’ water polo head coach Kendal Jarvis hopes to use his energy and skills to inspire new players.

As the start of the boys’ water polo drew closer at the end of summer, the school was scrambling to find a new head coach to replace Michael Fleming, who left to coach at Homestead High. At the last minute, Kendal Jarvis, the captain of last year’s varsity team, volunteered to fill the spot.

Fleming, who joined Saratoga mid-way through last year’s season, was originally intended to be replaced by a team parent. However, concerns about his availability led to Jarvis being chosen as head coach instead, despite his young age.

Jarvis’s main motivation in agreeing to coach the team was to carefully guide new players through a sport he loves.

“My goal is to watch these younger players do things they didn’t think they were going to be able to do,” he said.

Jarvis admitted that his age and relatively recent experience as a student compared to typical sports coaches has had an enormous impact on his interactions with the team: He said that many of the seniors and juniors on the team see their relationship as one between friends, which has caused some minor authority problems with the varsity team.

The younger players, however, respect Jarvis’s coaching — especially with his youth bringing a much needed vitality to the pool. This allows for his practices to be more interactive and the schedule to be more flexible.

Upperclassmen players said they have noticed differences in his teaching style as well, particularly his interactiveness with the players. Tsives pointed out that Jarvis is the first coach he has had who physically gets into the water to demonstrate techniques.

“There’s this position called hole set, which is a very hard position to play,” Tsives said. “You have to wrestle people in the water [while on offense], so he’ll get into the water to show shooting backhands while I’m defending [to demonstrate it].”

Along with being able to coordinate drills from the pool and provide a model for players, he hosts optional practice on the weekends for more committed players.

Despite these advantages, Tsives said that Jarvis still lacks the experience that other coaches like Chung had in advising players during heated moments of a match.

“This is [Jarvis’s] first year coaching while every other school’s coach has been coaching for over ten years,” Tsives said. “It’s a different experience but I’m looking forward to the rest of the season we have with him.”

Rather than emphasizing the standalone strategy of matches, however, Jarvis focuses more on long-term improvement in skills. As a coach, he pays more attention to how water polo can be an invaluable experience for the players and how he can make each player a better learner. He has applied this philosophy to his coaching, trying to foster persevering attitudes.

“They’re not going to learn from somebody who’s telling them they’re doing nothing wrong,” Jarvis said. “I want them constantly striving to improve.”

The coach has seen freshman and sophomore players make big strides, especially in their physical fitness.

The end of Jarvis’ coaching days is in sight, however: After Oct. 24, Jarvis will leave for Navy Boot Camp in Chicago, where he will be cut off from communicating with the team. He has no plans to continue coaching after leaving.

“As far as water polo is concerned, once I’m gone, I’m gone for good,” Jarvis said.

The regular season will likely have finished by that point and a team parent will be replacing him.

Until then, Jarvis is determined to do as much as he can to help the players. Their hard work and persistence in learning a sport that Jarvis loves is inspirational to him.

“I was fortunate enough to play in front of a big crowd and it’s something I’ll remember for the rest of my life,” Jarvis said. “I think these guys quite frankly deserve it more than I did.”