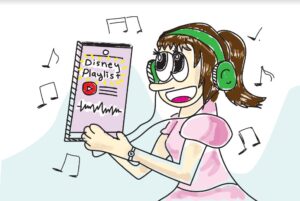 Permalink
Although it’s difficult to fathom a teenager frequenting music like “Do You Want to Build a Snowman,” there’s no other style of music I would rather listen to.

Saying that I live under a rock in terms of musical preferences is a blatant understatement. For anyone scrolling through my most-frequented playlists on YouTube Music, it’s nearly impossible to trace the listener back to me — or any 17-year-old living in 2022 for that matter.

The songs I listen to are not exactly old-fashioned, but they can give off (for lack of a better description) childish vibes — many of them accompany movies for younger children. Deviating away from mainstream pop culture and trendy music, I find solace and inspiration in songs that connect to my inner childhood.

My favorite and most-frequented playlist is my faithful Disney Mix, consisting of songs like “How Far I’ll Go” and “I am Moana” from “Moana,” “Colors of the Wind” from “Pocahontas,” “Do You Want to Build a Snowman” from “Frozen” and “The Next Right Thing” from “Frozen II.” (Believe me, this list is just scratching the surface.)

Often associated with naïve, cheesy storylines that are primarily tailored to audiences ages 4 to 12, these Disney songs mean so much more than they are given credit for.

Take “How Far I’ll Go” and “I am Moana,” for example: While “How Far I’ll Go” revolves around a teenage island girl who longs to journey across the sea on a superficial level, it also brings to life the intangible struggle between societal expectations and inner passion.

The music transforms Moana’s internal indecisiveness between ruling her people and exploring the ocean — a manifestation of her father’s will versus her own aspirations — into a conflict that is relatable to all people whose life decisions may clash with their family’s hopes.

“I am Moana” follows later on, forming the same basic melody as “How Far I’ll Go,” but demonstrating a new growth in Moana’s self-identity after a spiritual visit from her deceased grandmother. “I am Moana” confronts both love and family misunderstandings with simple yet powerful lyrics that even young children can relate to. Coupled with Auli‘i Cravalho’s crystal clear vocals — a signature Disney element — these songs are incomparable to any other genres.

Even  “Do you Want to Build A Snowman,”  a 2013 “Frozen” masterpiece second only to “Let It Go,” can seem childish and far from insightful at first glance. Sure, the scenes are a bit silly, as it will likely go down in history as the song which featured toddler Anna — the cutest little girl ever — singing about jolly snowmen, balls in ballrooms, dancing chocolate statues and slippery staircases. But the music is powerful nonetheless.

To parents, “Do you Want to Build a Snowman” encapsulates the everlasting beauty of watching children grow up, taking listeners on the journey of two little girls who blossom into capable young women. At the same time, it comments on the hurdles between sibling relationships, pitfalls of poor parenting (consider the dangerous “conceal don’t feel” mindset Elsa develops), loneliness of neglected children, grief of lost parents, and isolation of a girl (Elsa) no one else understands and most importantly — the unrelenting hope someone like Anna can cling to despite it all. No other music can come close to capturing all these enduring elements cohesively.

Second on my list and right underneath Disney songs is musical theater music, the top two categories of which include “Hamilton” songs and “The Greatest Showman” hits.

Similar to my fondness for songs such as “How Far I’ll Go” and “Do you Want to Build a Snowman,” works like “Dear Theodosia” from “Hamilton” and “A Million Dreams” from “The Greatest Showman” demonstrate the same uplifting messages of family, love, optimism and hope that triumph despite the lives of complicated characters.

The sweet, mellow melody of “Dear Theodosia” starkly contrasts the other heavy, rap pieces of “Hamilton,” featuring solos from Aaron Burr (played by Leslie Odom Jr.) and Alexander Hamilton (played by Lin Manuel Miranda) as they shed their political defenses. Within the music, listeners can follow the vulnerability of two high-achieving, cold-set 18th century men as they sing about unparalleled love for their children’s futures.

Meanwhile, “A Million Dreams,” as the title suggests, delivers a captivating interpretation of the role dreams play in adolescent aspirations. Similar to “Do you Want to Build a Snowman,” “A Million Dreams” follows the growing up of a boy who lives a life of poverty and starts his own entertainment industry by incorporating the outcasts of society into his shows — all while sharing his life with his true love.

In his journey, listeners feel the abstract concept of hope within the upbeat musings of the boy as he recites the millions of things he hopes to do. These aspirations formulate a unique combination of relatability and fondness for the kid behind “A Million Dreams,” elevating music beyond the simple, catchy tunes often idolized in mainstream pop music.

Of course, while Disney songs and theater music fill up the majority of my playlists, I do occasionally flock to nostalgic mainstream pop hits like “22” by Taylor Swift and “Roar” by Katy Perry — songs that accompanied my elementary school years.

However, what ultimately links my odd music tastes together involve each song’s abilities to tell stories. My favorite songs transport me into the lives of fictional characters just like novels do, while simultaneously creating realistic lessons I can reflect on.