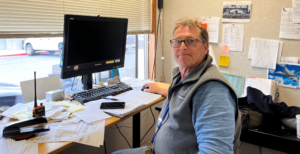 Permalink
With over 30 years of experience working as a facilities manager at high tech companies in the Bay Area, Weir has used his knowledge to keep the school running smoothly.

Plant supervisor Paul Weir sat in his office in the building behind the science wing on April 21, tackling yet another problem: Swim coach Michael Allegreti had informed him about the shutdown of the recently fixed pool pump due to overheating and bolts falling off. Weir told Allegretti to send videos of the malfunctioning motor to the installation company and promised to call them later that day.

Both Weir and Allegretti are certified pool operators, and Weir relies on Allegretti to inform him about any potential malfunctions with the pool, such as the broken pool pump.

“As you can see, [the school] has big investments in infrastructure in parts and installations,” Weir said. “Not everything goes perfectly along the way, but that’s the reality of [my job].”

Weir first got into the cleaning and maintenance business when he moved to Saratoga from Orange County in 1975, fresh out of high school and unsure of what career path to follow.

“I rented a house on Oak Street and rode my bicycle to Los Gatos with no skills and talked to some restaurants who needed work done,” Weir said.

For the next 10 years, as part of his work with restaurants, Weir managed his own one-person janitorial company while working simultaneously as a commercial carpenter in downtown San Jose, where he did tenant improvements — customized alterations made to rental spaces — in high-rise buildings.

To balance his two jobs, Weir resorted to working seven days a week.  From Monday to Friday, he spent 14 to 15 hours working as a carpenter during the day and as a janitor at night, and on the weekends he cleaned bars and restaurants.

“I learned customer service [working as a janitor in LG], and I got exposure to commercial construction [as a carpenter],” Weir said. “Those two things — custodial and janitorial work — were the perfect blend for my facilities management career.”

For the next three years, he worked in maintenance at Amdahl, an information technology company that made mainframe computers, powerful computers used to process data at large companies. He completed work orders submitted by employees, such as fixing doors and desks, helping people move into or out of their offices and fixing broken toilets.

At the time, Amdahl was competing for a high level business award, the Maxwell Award, which required systemic quality from manufacturing down to maintenance. Thus, facilities management was a point of emphasis.

In that job, Weir learned the importance of corporate facilities within businesses, an understanding which he carried for the rest of his career.

“I remember the facilities manager addressing our team of 200 people in maintenance, and he stressed the importance of fixing the toilets,” Weir said. “When customers from around the world come to Amdahl and the toilet in the lobby doesn’t work, they don’t have a lot of confidence that you can make a computer.”

To extend his skills, he enrolled and completed a certified manager program at UC Berkeley in two years. He learned about the 11 disciplines of facilities management, including real estate construction, project management, finance, human resources, negotiations and integrated business partners.

Weir received his certificate in 1996. After leaving Amdahl, he worked at ABM Industries as the US facilities manager for four to five years, where he managed over 4 million square feet of facilities. As facilities manager, he led a team of maintenance workers and custodians to keep the company’s campus.

Later, as the dot com boom started to grow, Weir interviewed for Net Manage, a company that created software required for computers to communicate, because he wanted to go into high-tech. He ended up working there for 12 years.

“Working as a U.S. facilities manager was a great experience,” he said. “The internet was just ramping up, and it was really exciting.”

A month after being laid off from Net Manage due to company acquisition, Weir was hired to work as the U.S. facilities manager at ARM, a company that designs chip architecture, for six years.

Afterwards, he worked at Hilton International for seven years as a chief engineer, working on projects in Monterey, New York City and Chicago. When he left, he worked for a year in his “dream job” managing a billion-dollar portfolio of commercial property, where he helped renovate historic buildings.

“All of these job chances were incremental steps and incremental exposure to me to facilities management,” Weir said.

In 2019, with encouragement from his wife, Weir applied to and was hired as the plant supervisor at SHS after his brother-in-law Brian Moran retired from the position. He soon found that his job was significantly different than the large tech companies he was used to working at.

“It’s the first time I’ve worked at a school, and it’s a real beast,” said Weir. “It’s a living, breathing animal seven days a week, and it’s the absolute hardest job I’ve ever had in my life.”

Despite loving working here and learning from both staff and students alike, Weir constantly experiences ups and downs.

“I have moments of exuberance where I feel really good, but within a fleeting moment, there’s a new disaster, a new breakdown or a new problem that I didn’t foresee or know about, so it’s definitely a challenging job,” Weir said.

Weir works weekdays from 5 a.m. to 11 p.m., and he is on call during the weekend. Each morning, he starts off by raising the flag and taking a moment to appreciate the silence of the campus.

“[Putting up the flag] is something I feel honored to do at the high school, and it gives me a chance to walk through the campus in a quiet fashion,” Weir said.

Afterwards, he meets with his team and discusses work assignments, which comes in through a system called AkitaBox, a software that allows teachers and staff to input work orders. These assignments include setting up chairs for an event, fixing a broken toilet or a leaking roof.

Weir has found he can’t take time off since he and his team work during breaks, which allows them to finish important projects. For example, over the spring break, Weir and his team fixed the air conditioning in the English Palace, repainted the floors in the sports bathrooms, speed bumps and directional arrows in the parking lots, hired contractors to appraise the sports fields’ conditions and fixed the pool pump.

Over the pandemic and online schooling for students, Weir sometimes patrolled the campus to prevent people from dumping old cars or washing machines in the parking lot.

Additionally, Weir’s team had to adopt COVID-19 protocols, such as cleaning frequently touched areas such as door handles and using an electrostatic cleaning process — where a solution is electronically charged to clean on top of and under desks — three times a week.

Despite his limited time off, Weir pursues a variety of hobbies. He restores antique Porsches, sculpts  in mediums such as granite and marble and plays piano and the trumpet. He is also a certified artisan cheese maker, and his blue cheese has won Best of Show in Monterey and Santa Cruz. He is also an avid lover of long distance communication — his dad launched over 70 satellites as the launch director for the European Space Agency — and holds the highest licensing an amateur can have from the Federal Communications Commission.

Additionally, Weir’s experience as previous operations managers and the 11 disciplines he learned earning his certification, such as negotiations with contractors, has benefited him in this job.

In Weir’s opinion, working at the school is extra rewarding compared to his previous jobs. While final products for companies like Amdahl were computers, his “finished product” was helping support the next generation of educated students along with a hardworking custodial staff.

“[The workers] are all great people and really dedicated to what they do,” Weir said. “They care about the school, and if you walk around the school, you can tell it’s really clean and well-cared for. They’re always things to do and make better, but we just want to keep the heat and lights on and create a healthy environment for students.”