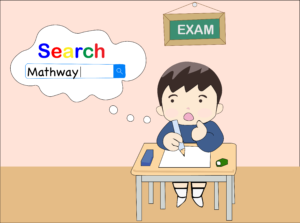 Photo by Anjali Pai
Mathway was a commonly used website that many students used to cheat during remote learning.

Editor’s note: Nick and Marie are pseudonyms used to protect the identities of the two students interviewed for this story.

When junior Nick first heard that schools were reopening in the fall for in-person education, instead of feeling jangling nerves of excitement, his stomach sank. Stress and anxiety gripped him as he pictured taking a test without any external resources to help.

When his first in-person math test rolled around this fall Nick realized he had no clue how to solve a majority of the problems, even problems reliant on concepts covered last year. He had never memorized them and instead sought formulas from his notes offscreen.

With the return of in-person school, students like Nick have found themselves struggling with testing because they cheated  during remote learning and don’t have the knowledge or skills required in their classes this year.

Last year, The Falcon interviewed students who cheated while at home. A year later, after reverting back to in-person school, Nick and Marie, the students interviewed for that story, say they have been hit with the impacts of their reliance on cheating. And they are hardly alone.

A 2020 study conducted by McKinley & Company found that on average, students could be behind by almost nine months in math courses because of the nature of online learning, which, combined with higher rates of cheating, has created significant learning gaps in material.

Last year, Nick sought online websites and called his friends while testing to ensure high scores on his math tests.

“I needed to keep my grades up last year and I knew it would be easier if I cheated,” Nick said. “Now, it’s hard to get used to taking tests with no help after doing it for an entire year.”

Likewise, Marie, a senior, said she used her notes on almost every test she took last year. Returning in-person has forced this habit to stop, since she is unable to reference physical notes without being spotted in a classroom.

When school was online, Marie said her cheating was a method to cope with increased stress, which she attributed to increased pressure as a junior.

“I was stressed out about my grades,” she said. “I always had test and grade anxiety, even before we started Zoom classes, but [online learning] just made it worse.”

A large factor that influenced Marie to cheat and spiked her test anxiety was the desperation to meet her parents’ approval. Marie was also encouraged to cheat when she discussed the topic with her friends. They agreed that cheating was acceptable if it promised better grades.

“I didn’t want my parents to get mad at me about my grades, and I didn’t want to have low grades myself,” she said.

Cheating influenced by peer pressure was — and is — a fairly common occurrence. Results from student surveys indicate that students at high performing schools with academically intense environments tend to cheat due to a fear of low grades and pressure to maintain their status in a success-based community. A 2019 Challenge Success survey of 16,000 students found that 80 percent of students feel “quite a bit” or “a lot” of pressure to succeed academically, and 79 percent of the students surveyed cheated in the past month before the survey.

Marie admitted that she didn’t want others to know she was struggling, a factor that contributed to her cheating.

“Everyone I knew thought school online was easier,” she said.

Research has demonstrated that students are more likely to cheat in classes that emphasize tests and grades, and less likely to do so when they feel that true mastery of the material is being taught.

With the return to in-person school, Marie said her outlook is shaky, especially because she went into the year feeling unprepared for her challenging course load.

“I have been really worried about my grades and I don’t know how I’m going to learn properly now,” she said.

Math teacher Kristen Hamilton also noticed that students are “stretching themselves” more by picking courses that are more heavy than they can handle. She said that Honors and AP courses may not have been as difficult during online school, but they require sufficient time devotion in an in-person year.

Hamilton also observed noticeable learning gaps among students, particularly on material covered last year. Despite this, not all students are seeking enough help.

“In person, it can be more intimidating to ask questions,” she said. Hamilton also attributed the reduced opportunities to ask questions to the advisories that have taken up multiple tutorials already this year.

Some math teachers have taken learning gaps and test anxiety into consideration for the new in-person school year by adjusting testing and grading policies. Hamilton said the homework category in her Honors classes now weighs 10 percent more than in previous years, and the assessment category has been reduced by 5 percent. Math teacher PJ Yim incorporates daily quizzes in class to replace a few chapter tests and transfers more grade weight to participation to reduce stress, while math teacher Jennifer Mantle administers tests in the form of rough drafts in class and final drafts at home, which gives students two chances to complete the exam.

Many teachers hope that due to the more lenient measures, students will feel less reliant on cheating. Despite the challenges of transitioning to in-person learning, students and staff both believe that as policy adjustments are implemented and as time goes on, learning gaps created last year will gradually be mended.

Thus far, Marie’s test anxiety has only increased in comparison to last year due to her inability to cheat while in a physical classroom. As a result, she said she has considered cheating again because it is so common in the school’s environment.

Marie said that her math grade is considerably lower than it had been in past years due to cheating last year. Her struggles in math class only add to her desire to cheat.

“The administration stresses the importance of academic integrity a lot, but I notice so much cheating among my friends and in general at SHS,” Marie said. “It’s hard to take it seriously when you’re surrounded by people who have that same fixed mindset about grades.”

The two students interviewed by The Falcon made it clear that they were not the only ones who resorted to forms of cheating to guarantee good grades during online school. Coupled with students’ continued desire to cheat in-person, the duo claim that this may be a reflection of students’ loose grasp on academic integrity and a warning about SHS’s intensely competitive environment.

Thanks to teachers’ new adjustments in curriculum and policy, Nick and Marie know they need to alter their methods of learning material from last year.

“We may not get past COVID, who knows,” Hamilton said. “But we want to slowly integrate students back onto a normal track of learning.”