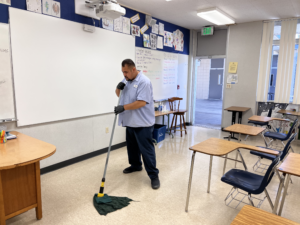 When students leave campus each day, the school’s six night custodians sweep through the school like a magical cleaning spell. They dust the bookshelves, sweep and mop the rooms and secure the campus for the oncoming night. The hard work of countless maintenance employees and custodians both during the day and night keeps classrooms clean, bathrooms functioning and school facilities running smoothly.

The school employs over 12 workers to maintain its 40-acre campus: two groundsmen who take care of the plants and sports fields; two maintenance mechanics who work with the plumbing and electrical systems and fix broken items in different buildings; two custodians who tidy the campus and facilities during the day; and six night custodians who clean over 100 classrooms every day.

After the lunch bell rings and students file to their classes, day custodian Andrew Hickey picks up the trash left behind as part of his role managing the cafeteria complex and McAfee Center.

Hickey has been a blue collar worker his entire life. He grew up near Leigh High and went to West Valley College for three years before transferring to Cal Poly Humboldt in Northern California.

Hickey originally moved to Humboldt for the nice weather, which never exceeds 80 degrees. There, he liked to fish, hike and mountain climb.

“I spent [most of my college career] goofing off, and I didn’t take [my education] seriously,” Hickey said. “I ended up being a history major because I didn’t know what I wanted to do and thought, ‘I might as well learn about the past.’”

After college, Hickey spent 12 years working in restaurants and “goofing off” because living in Humboldt county was cheap. However, he later moved back to Silicon Valley.

“[Humboldt] finally got too isolated for me,” Hickey said. “I wanted to go to more Sharks games and go to more concerts instead of having to drive six hours to one.”

When he moved back to the Bay Area, Hickey moved into his parents’ house — his childhood home — where he currently lives to help take care of them in their old age. In his free time, he watches Netflix, reads science-fiction books and plays video games such as Fallout 3 and Fallout Las Vegas.

After moving, Hickey first worked as a landscaper, then as a substitute custodian for Los Gatos High from 2003 to 2005. Afterwards, he worked at a job where he blew lint from dryers, a job he hated.

After six months working as a substitute custodian at Saratoga High in 2009, Hickey started working as a day custodian when a previous custodian left and the position opened up.

Each day, Hickey cleans up the kitchen to maintain health standards and prevent insects from coming in. He also removes trash from the quad, keeps the copy room supplied with paper, delivers UPS and FedEx packages to teachers and — more recently — removes goose poop from the quad.

Hickey works from 7:30 a.m. to 4 p.m., with weekends and certain holidays off. Hickey starts off each day looking at the calendar for events at school, before cleaning the kitchen, drama center and McAfee Center depending on whether it will be used.

“People aren’t supposed to bring food into the [McAfee], but most people don’t abide by that,” Hickey said. “I have to go through and pick up the garbage that people leave behind.”

He said the McAfee Center, built in 2005, has been aging poorly; however, renovations have not been made as it is constantly in use.

“If you go inside the McAfee, you can see that the paint looks shabby and the carpets are stained,” Hickey said. “We don’t have enough time to clean things, and sometimes, when we do clean them, nothing changes.”

Hickey used to take overtime to work weekend shifts, but due to funding cuts and minimal overtime pay — which is taxed higher than normal pay — he does so less frequently.

“[Members in the crew] used to work overtime all the time, but now there’s money restrictions and [the district office] is trying to penny-pinch,” Hickey said. “They see the bottom line, and they say, ‘we don’t need that much work.’ So in some instances, we’re understaffed for projects.”

In efforts to reduce costs, he said the district tried for years to reduce the number of workers, but once they succeeded in removing one custodian, they found out that the work was not getting done, resulting in the hire of another to replace the one who left.

The maintenance and custodian workers at the school are all part of the California School Employees Association (CSEA). According to Hickey, the union serves to negotiate for pay raises and prevent workers from being fired without just cause.

When the pandemic hit, all the maintenance and custodial workers were sent home with paid leave. After six weeks, they were called back to the campus, but the crew was stymied by pandemic-related restrictions.

Additionally, infections of crew members seriously affected the team, as there is only one substitute worker.

“No one wants [to be a substitute],” Hickey said. “If there’s no long-term benefits or a guarantee they’re going to be hired eventually, most people don’t want the job.”

Despite these pandemic-prompted challenges, Hickey enjoys the privacy his job affords him.

“I’m pretty much left alone because I’ve done [my job] for so long,” Hickey said. “I can choose where I’m going to clean, and if it’s not super busy, I can take my time doing my job.”

Nonetheless, Hickey deals with the constant challenge of working on a high school campus.

“Students often leave trash behind after lunch, and I sometimes get mad when there’s a trashcan five feet away and students still don’t throw their food away,” he said. “Over the years, I’ve accepted it — students have more important things to worry about.”

Night custodian lead Octavio Escobedo: working at SHS for half his life

Night custodian lead Octavio Escobedo manages a team of five night custodians and, together, they clean all the classrooms, patrol the school to prevent vandals from entering, turn off the lights and lock all the rooms before leaving campus.

Escobedo grew up in Silicon Valley and after graduating from Willow Glen High, worked in construction for two years. He then worked at the school in the evening and construction in the mornings simultaneously for seven years. Afterwards, he left his construction job and has worked full time as night custodian lead for 20 years.

Escobedo’s wife also works in the school’s cafeteria. When Escobedo was 19, they had a son, who graduated in 2020 and is attending college as a history major — he hopes to come back and teach at SHS.

“[My son] was the reason I kept working. [I thought], ‘He needs clothes? Ok, I need to keep working,’” Escobedo said.

In his free time, Escobedo pursues hobbies such as renovating his 1965 Pontiac Bonneville, refurbishing furniture and building wood items like a wishing well, which he made for one of his friends.

Escobedo works daily from 3 to 11 p.m., and begins the day by meeting with his custodians, each of whom has their own area to clean. The typical classroom takes 10 to 15 minutes to clean, but teachers’ needs complicate cleaning.

Escobedo has witnessed attempts to cut down on maintenance staff. As such, he said the union has been extremely helpful.

“We pay [the union] money, and they protect us,” Escobedo said. “It’s good to have them because they look out for you.”

However, Escobedo said teachers — who are a part of a different union — often get larger and more substantial pay raises than those who work in the cleanup sector.

Additionally, with the lack of substitutes, Escobedo struggles to completely clean the school during the night when crew members are missing.

“Sometimes, I might be missing three people, and the next day, [the administration] is asking, ‘How come you didn’t get everything done?’, and they forget that you were short three people,” Escobedo said. “The district office looks at the picture, but they don’t look at the whole picture.”

Escobedo also helps around the school besides cleaning classrooms: “Because of my background, I’m not scared to get my hands dirty. I’ve dug holes, fixed doors, painted, done plumbing and landscaping. Everything you can think about at this school, I’ve done it.”