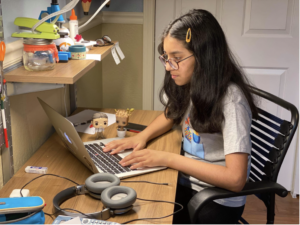 Despite the disappointment that came with beginning high school in a completely virtual setting, the Class of 2024 remains optimistic

Freshman Kavya Patel felt her mind wander as she stared at the 30 faces taking notes in silence. She thought back to how her middle school self imagined high school to be, from decking out in green on rally days to cheering on the football team on crisp Friday nights. Patel anticipated joining the speech and debate team and was counting down the days to her first Homecoming week and quad dance.

Patel said it has been difficult to remain enthusiastic about starting this new chapter online, although it has been a less intimidating environment.

“I was really looking forward to being around upperclassmen and getting to make friends,” Patel said. “In middle school, everyone already knew each other, but high school was supposed to be a way to meet different people.”

Even within her own grade, Patel said forming new relationships  has been a challenge. Instead of being able to freely collaborate in in-person group activities, students are placed in breakout rooms that Patel finds awkward.

While Patel considers whole-class discussions to be less rigid than breakout rooms, she still does not feel entirely confident speaking up in online classes.

“It’s really uncomfortable to ask questions on Zoom because everyone’s paying attention to you when you talk,” Patel said. “Usually I can get to know my teachers when other students are just talking amongst themselves, but you can’t do that online.”

For freshman Arushi Maheshwar, however, virtual learning has taken some of the pressure off of starting high school. Instead of entering an unfamiliar environment, Maheshwar has found that doing lessons from home is a lot less daunting.

“Walking into a brand new school can cause a lot of anxiety,” Maheshwar said. “But staring at a bunch of little faces on a screen is a lot less scary.”

Regardless of easing some of the initial nerves, Maheshwar said starting high school online is not optimal, as she was looking forward to becoming an active participant in the school’s drama department.

“Drama is a huge part of my life, and I’d be really disappointed if all the shows got canceled,” Maheshwar said. “But I’m going to keep moving forward and get involved with the program in all the ways I can.”

Maheshwar is struggling to stay as optimistic when it comes to forming bonds with her peers. After moving to SHS from BASIS Independent, a private middle school in San Jose, she was eager to meet new people and make new friends. But without the simplicity of encountering new faces through mutual friends and school events, Maheshwar has had to push herself out of her comfort zone to reach out to others.

Freshman Celina Alazzawi, who had been homeschooled by a tutor for her entire life, said she has been disappointed by the lack of social interaction, having looked forward to her first year of public school.

So far, Alazzawi has not formed any bonds in her Zoom classes, but she’s hoping that after joining the Model UN and Girls Who Code clubs, she’ll be introduced to a variety of people who share her interests. Until then, she is prioritizing succeeding in all of her classes, rather than dwelling on the negative aspects of online learning.

“Coming from a life of homeschooling, I’m used to not being around a lot of people,” Alazzawi said. “So I’m mainly focusing on staying organized and balancing having so many classes.”

Although they are experiencing a much different version of high school than they imagined,  Alazzawi and the rest of the Class of 2024 are trying to make the best out of the situation and remain hopeful about the future.

“It is so important look at the bright side and understand that nothing stays permanent,” Alazzawi said. “I just need to tell myself that this will pass, and that holds true to everyone’s situation.”