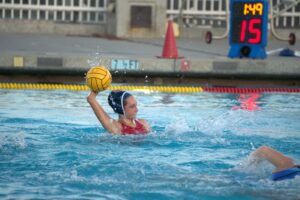 Photo by Stephanie Sun
Freshman Cassidy Coghlan winds her arm back in preparation for a shot during a game against Santa Clara on Oct. 5.

Water splashed and shrill whistles blew as freshman Cassidy Coghlan swam during her first water polo practice with the SHS team in August. After coach and player introductions, the team practiced swimming and conditioning work.

When Coghlan signed up to play high school water polo, she never anticipated that she would move up from JV to the varsity roster at the beginning of the season.

Coghlan, who started swimming at age 3, was first introduced to water polo when her swim club hosted a water polo clinic over the summer of 2020. Her close friend, who played for West Valley Water Polo Club, encouraged her to join because of her swimming background. Coghlan joined the club in August 2020 and soon discovered a love for the sport.

For Coghlan, water polo combined elements from swimming and soccer, which she played briefly in summer 2020, into a sport she loved. She said the fast pace and multitasking aspects of water polo made the sport challenging and engaging.

“I liked soccer; I just wasn’t really good at it,” Coghlan said. “I was a swimmer for a long time, but it’s just going back and forth [across the pool]. Playing water polo is so much more interactive — you can’t go back. When you’re in the water, it’s really exciting.”

After playing for West Valley for a year in 8th grade, Coghlan joined the SHS team and was bumped up to varsity in the beginning of the season, which she said was a completely different playing experience for her.

Due to the small roster of the SHS team, her playing time has increased compared to when she played with West Valley, she said. Before, she never played full games as she was switched in and out with other substitutes between quarters, but she now plays all four quarters and is a strong addition to the team’s offense along with juniors Rosie Kline and Fiona Feng and sophomore Ryder Gangemi.

The team currently holds a 1-8 record, winning their most recent game on Oct. 5 against Santa Clara 7-6.

The players mostly attribute their struggles to the loss of several key players to graduation and adjustments to new coach Alex Hseuh’s coaching style. Additionally, there is a larger number of injuries compared to previous seasons, with four players currently benched due to concussions and shoulder injuries. Coghlan herself broke a  finger on her throwing arm earlier in the season, but continued to play through her injury.

Still, she is hopeful for improvements throughout the season, citing the strong teamwork and friendships within the team.

“Everyone here is pretty good,” Coghlan said. “In other teams, I think there are a few people who just take off and everyone tries to catch up. But here everyone works together more, and we’re all just trying to do it together.”

Coghlan’s personal goals for the season are working on pressure passing and building up her confidence in the game. Overall, however, she has enjoyed her experience thus far on the varsity team.

Although her teammates have been welcoming, Coghlan sometimes doubts her qualifications and feels out of place due to her status as “that freshman girl” on the team. She said she feels that the older athletes have more experience and knowledge about the sport and other teams.

“Since my friends are on the JV team — and I started there too — sometimes I feel like maybe I should be there because everyone else is,” she said. “When I make mistakes, I’m like ‘oh, that was kind of a JV move, maybe I should go back down.’”

Despite being the sole freshman on the team and occasional periods of self-doubt, Coghlan said she thinks varsity is the right level for her. She enjoys the challenge of playing at a high level and facing off more competitive opponents.

“It’s pretty good being on the SHS team. Everybody here is super nice and knowledgeable about the sport,” Coghlan said. “It’s fun, and I love being in water polo.”