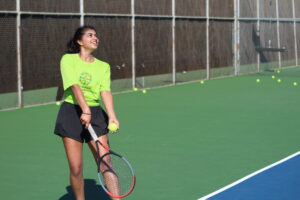 Horantur getting ready to serve during a practice match.

In August, freshman Megha Horantur tried out for the varsity girls’ tennis team and wasn’t sure of her chances.

Then the day came for her to find out the results. She made her way to the locker room bulletin board: She was the only freshman to make varsity.

Despite being the only freshman on varsity this year, she said she didn’t notice a big difference in the way that she was treated. Rather, she said the team helped her grow as a person.

This is also Horantur’s first year playing with a team, which she feels is drastically different compared to playing as an individual.

“I got into tennis by watching my older sister practice and compete in tournaments,” Horantur said. “I always thought that it was really cool, and when I started playing, I found that I loved the sport as well.”

Since then, she has played several key games and matches that have contributed to her love for the sport and her determination to keep playing. The Green-ball Tennis Sectionals she played in 2014 for USTA was especially inspiring, emphasizing the determination needed to compete in tennis.

“I remember playing a really long match and the score was very close,” Horantur said. “I lost that match in a split set, but that match really motivated me to improve and I ended up winning the consolation draw in that tournament.”

This match, as well as many others, helped her recognize her love for the sport. As a result, she decided to pursue tennis in high school and eventually rose to become the 2nd player for singles, a spot reserved for top players on the team. Being a part of the team and having people support her in a team has been very encouraging, Horantur said.

This change has also led Horantur to become a more optimistic player, and she is grateful for the opportunity to represent the high school team this year.

“I think being part of a team has definitely increased my positivity,” Horantur said. “I’ve been more positive while playing, instead of getting angry for small things. I think just playing more matches on the team will help me with my mindset and growth.”