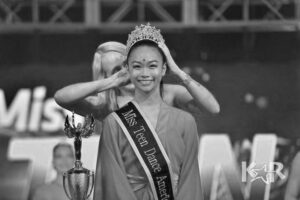 Freshman Shannon Ma was stunned when she was crowned the primary level Miss Teen Dance America this past summer in Anaheim, Calif., at the Kids’ Artistic Revue (KAR) national competition.

“I didn’t hold any hope to win,” she said. “When they announced the winner and it was me, I was completely shocked.”

Although her win of the Miss Teen Dance America title is her greatest dance award to date, Ma has received several other honors in various competitions throughout her dance career, both in solos and in group dances. As she transitions into high school, Ma finds herself balancing dance with a heavier school workload.

Ma began dancing at age 3 at Jun Lu Performing Arts. Her mom signed her up for classes after finding out about the studio in Westgate Mall; as it turned out, many of Ma’s friends at the time already danced there. Ma took an immediate liking to dance and has danced with Jun Lu since.

Before 2012, dancers at Jun Lu spent an entire year preparing for one winter showcase. The annual event is held over two days in mid-December, with approximately 25 dances performed on each day. The winter showcase is traditionally located at Louis B. Mayer Theater in Santa Clara.

In 2012, Jun Lu’s first competition team, which included Ma, was formed. The team officially started competing in 2013, when Ma was 7.

Ma said that the team approached their first competition with a carefree attitude.

“At first, we were so clueless because we didn’t know we were going to compete, and then one day the teacher was like ‘You’re going to competition,’” Ma said. “It was really no pressure because she didn’t have any expectations and it was new to us too.”

For their first two or three years, the team focused on jazz dances, but they eventually turned to folk Chinese and contemporary styles.

Ma said that her teacher usually has a basic idea of what she wants the team to do, but gives the girls two or three dance styles to choose from.

Ma recalled her first solo dance, titled “Flying Apsaras,” which she first performed at a Jun Lu winter showcase. She performed it at KAR in 2017, years after her first dance competition. It was originally intended to be a duet, but the day before the competition, Ma’s duet partner sprained her knee, and Ma was forced to pull the dance off as a solo.

Since then, she has performed a solo every year at KAR. She has also participated in Showbiz, American Dance Awards (ADA) and Starpower. In July 2019, Ma won KAR’s title competition for primary soloists and was named Miss Teen Dance America while her team won the title competition and received the National Grand Champion Award for secondary large group performances.

The day before she was crowned Miss Teen Dance America, Ma didn’t dance her very best against the other regional Miss Teen Dances and placed ninth. Determined to redeem herself in the title competition, Ma gave it her all, even though the dancer who placed first the previous day was still competing against her. Ma’s ultimate win ended up teaching her a valuable lesson.

“That was when I learned that if you throw away your worries and just do the best you can do, you’ll never regret it,” she said.

As for her team, Ma said that they were very moved when they received their award.

“We’ve been going to nationals for years, but we’ve never gotten the Grand Champions,” she said. “This year, we finally got it, and it was really emotional.”

As she progresses into her freshman year, Ma is unsure how she plans to balance dance with high school. Since the school year is just beginning, she feels that managing school along with her extracurriculars — mainly dance and violin — is doable. Ma currently practices dance about 10 hours a week, mostly in preparation for Jun Lu’s upcoming winter recital.

However, Ma acknowledges that she will have to cut down on dance at some point since school will become more stressful. Even with her current workload, she found that she could not commit to joining the school dance team; instead, she does ISPE for her P.E. credits.

Ma said that she could see herself dancing in the future as a means of exercise or simply as a way to make herself happier. She said that her years of dance have not only taught her perseverance and resilience, but have also given her stage experience and improved her stamina and creativity.

Even when removed from competition, Ma still appreciates that she can let go of her stress when she dances.

“If I’m mad, dance makes me less mad, and if I’m sad, dance makes me happier,” Ma said. “It’s also really fun because I get to see my friends. I like the dancing environment because it’s creative, energized and just really positive.”