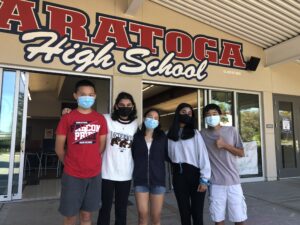 Photo by Tiffany Wang
Freshman ASB officers pose for a photo, ready for the coming year.

Instead of a normal class election involving social media campaigns and student voting, the ASB elected this year to decide freshman class officers through an application and interview process.

“No one has really seen each other in two years, and we didn’t want the freshmen to feel too rushed,” ASB vice president Alex Yang said. “They would’ve had to start campaigning on the second day of school.”

Thirteen freshmen applied for class officer positions, which was a much higher turnout than in previous years, Yang said. On Aug. 23, freshman class officers were announced to be Alan Cai as class president, Anisa Taymuree as class vice president,  Caitlin Lee as class treasurer, and Ethan Yang and Kinnera Potluri as class representatives.

Cai, who moved to Saratoga recently, decided to run because he thought it would be a good way to get involved with the school and meet new people, he said.

For freshman vice president Anisa Taymuree, applying for class office was an opportunity to advocate for her peers. Despite having never participated in a leadership class before, Taymuree is looking to become more involved in the behind‐the‐scenes of school activities, including choreographing for Homecoming quad day.

“With the weird circumstances from the last few years, our class just needs someone to get them through the school year and fundraise for events so we can have a good high school experience,” Taymuree said. “My goal is to raise a lot of money this year and save for prom and future events in our senior and junior years.”

Taymuree believes the interview process was a necessary choice for selecting class officers given the time constraints because it allowed freshmen more time to decide whether class office would be a good fit for them. If freshman elections had proceeded as normal, many people would have needed to begin campaigning during the first week of school, she said.

“Given the circumstances, we went this way, and it makes sense,” Taymuree said.

Freshman class officers officially joined the second-period Leadership class on Aug. 25, and immediately jumped into planning for the school year.

Cai has many ideas that he hopes to implement during the coming year.

“One of my main goals is to help the traffic problem at the school,” Cai said. “Since I bike to school, the chaos before school is pretty dangerous, so that is something that I definitely want to improve.”

According to Taymuree, the officers were quickly able to settle into a comfortable team dynamic.

“We seemed to click right away when we first met each other,” she said. “There was no awkwardness, we just got along right off the bat. So I think it’s gonna be an easy school year in terms of teamwork — I’m excited for what’s to come.”