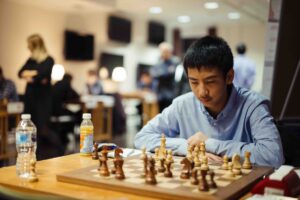 The 2016 World Youth Chess Tournament took place in Batumi, Georgia, a coastal town near the Black Sea. Andrew Hong, now a freshman, remembers being nervous as he faced his final opponent while thousands of pairs of eyes watched the chess board in front of him. Only a few pieces remained; Hong pushed his knight forward and breathed a sigh of relief as he called checkmate. A few moments later, Hong found himself sitting proudly onstage in the second place seat.

Hong now stands 24th in the world among chess players under age 16, and was named an International Master (IM) this past year for his prowess. His Fédération Internationale des Échecs (FIDE) Elo rating is 2,427, a score calculated from his performance against other players. Hong has won dozens of chess awards from competitions around the globe in Turkey, South Africa, Canada, Mexico and Austria.

Hong began playing chess when he was 6, after watching his older brother, senior Jason Hong, play a game against his friend. Hong became interested and decided to take up chess himself.

“When I started, I didn’t have any knowledge,” Andrew said. “I just thought the game was interesting because the knight looked cool.”

At the start, he mainly played Jason at home, and Jason taught Andrew basic chess techniques. A few weeks later, though, Andrew quickly overtook his brother.

“At first I was a little annoyed, especially when he started beating me regularly,” Jason said, “but I'm definitely proud that he's come so far and accomplished so much at this age.”

“My very first tournament in 2011, was a really nervous experience because it was my first time playing, and I didn’t know what to expect,” Andrew said.

After the first few tournaments he attended, Andrew found himself winning more than losing, which boosted his confidence. However, as his rating began to rise, his perspective shifted. Andrew suddenly felt the pressure to perform to the expectation of his rating and began focusing more on the end result of the games.

Andrew started to pick up the pace and take chess more seriously as he participated in further competitions in Philadelphia, New York, Dallas, Los Angeles and Charlotte.

“Now I kind of treat chess almost like another school subject,” he said. “I have homework for chess, I have tests for chess. I have positions to solve and openings and games to study.”

In reality, Andrew treats chess as much more than just an eighth period. He said he practices an average of 14 hours a week, a schedule he has kept up for five continuous years, and hopes to maintain for years to come. The strategy and quick thinking involved are what keep him playing chess, and he continues to value these aspects as a part of everyday life.

“I like how there’s a bunch of different ways to play games,” Andrew said. “There’s not just one fixed way to organize your pieces and try to attack.”

After particularly painful blunders that lost him winning positions in several games at his first World Youth Chess Championship in 2015, Andrew noted that losses have become less painful. He believes that unsuccessful games are inevitable and no longer takes them as seriously as he did.

In either case, his opponents are mostly around his skill level and double his age. Unlike Round Robin tournaments, pairings for Swiss tournaments come out only a few minutes before each round, so winning is based on genuine skill level rather than on in-depth analysis of competitors’ past games using computer software.

After countless tournaments in his seven-year journey, Andrew has experienced both hard-earned victories and painful losses, but he generally enjoys the fruits of his effort.

“It’s always a great feeling to win awards because it really shows that my work paid off,” Andrew said.