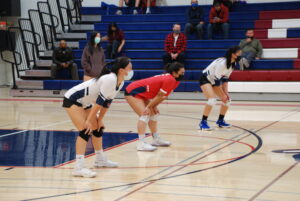 Photo by Selina Chen
Emerson Pak getting ready to pass a serve along with upperclassmen Lisa Fung and Noor Khan.

With only a year of volleyball experience, freshman Emerson Pak far surpassed her expectations by securing a starting spot on the varsity team.

Pak was inspired to start playing volleyball by her sister, junior Alexandria Pak, who currently captains JV. The younger Pak played outside hitter on the school team and holds the same position on her club team. She started her volleyball participation for City Beach before joining the school team. With City Beach, she attended many clinics and saw her skills increase greatly.

Pak said she was grateful for the opportunity to play alongside more experienced players on varsity, especially as an underclassman. Besides Pak, there were also two other freshmen on varsity: Dahlia Murthy and Shreya Raghuvanshi.

“I think it’s pretty fun that other freshmen are with me,” Pak said. “It makes me feel more comfortable that I’m not the only one.”

As the team came to the end of the season, their dynamic on and off the court has changed completely. Early on, Pak found it hard to converse with upperclassmen, resulting in the three freshmen sticking together. However, Pak and the rest of the team saw week by week improvements in team chemistry after working hard in practices and bonding during breaks.

“As the season progressed, everyone started getting really comfortable with each other,” Pak said. “We’re all good friends now.”

Against Cupertino on Oct. 21, they showed their unity with a  “pink out” theme to raise awareness for breast cancer. The players fought hard through the second set but lost 3-1.

Apart from adjusting to being a new team with older teammates, Pak also had to adjust to a new coach, Thomas Ching, and his coaching strategies. While it was initially difficult for Pak to adapt to the new environment, the upperclassmen have guided her through all the struggles of being in a new team and making new friends.

Though the team finished with a league record of 2-10, they used each loss as a learning experience.

Pak and the rest of the team ended their season on Oct. 26 with a 3-0 win in their away game against Milpitas. The team finished 6th in the El Camino League.

“I’ve learned a lot from the upperclassmen through the wins and losses of this season,” Pak said. “Whether we lost or won our last few games, I ended the season with no regrets.”