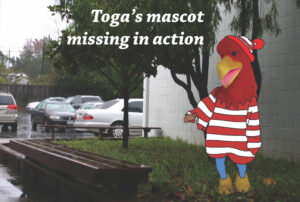 Freddie hides in the trees

Our school’s most iconic sports fan of years past—scarlet-feathered mascot Freddie Falcon—is missing in action. AWOL from the football team’s thrilling 21-17 victory over Los Gatos on Oct. 22 and seemingly camera shy from all of this year’s spirit days, our feathery friend sure seems to have flown the coop. And I for one can barely stand the suspense.

And so I set out to find Freddie, on a mission of grave importance to both the success of our school sports teams and my sense of investigative prowess.

Our school’s most iconic sports fan of years past—scarlet-feathered mascot Freddie Falcon—is missing in action. AWOL from the football team’s thrilling 21-17 victory over Los Gatos on Oct. 22 and seemingly camera shy from all of this year’s spirit days, our feathery friend sure seems to have flown the coop. And I for one can barely stand the suspense.

And so I set out to find Freddie, on a mission of grave importance to both the success of our school sports teams and my sense of investigative prowess.

I start at cheer coach Larissa Ridge’s doorstep. Earlier that day, I had received an anonymous tip from a cheerleader who claims he/she (are there even any guys on the cheer squad?) saw Freddie rooting for pee-wee cheerleaders at the halftime of an Oct. 29 football game versus Wilcox High. Somewhat incredulous of the reliability of this source, but acknowledging it as my only lead, I head for room H01. Ridge is there to greet me.

“What can I do for you?” she asks. I just want to know where Freddie is, I say. She chuckles. “Freddie has headed south for the winter and will probably not be back for a while,” she says. “You might catch up to him at a few basketball games.”

“Are you serious?” I reply. I don’t think she understands the gravity of my situation. She chuckles again and confirms the cheerleader’s account that Freddie had indeed attended the football game against Wilcox.

“So where is he?” I ask, more desperately this time. “Like for real?” she inquires. Yes, I’m dead serious, I say. (Who jokes about this kind of stuff anyway?) She directs me to a modest room less than one-hundred feet away: assistant principal Karen Hyde’s office.

I have most definitely ascertained Freddie’s whereabouts, or at least cornered the person who does know. But my quest is not yet complete—I must ID Freddie in the flesh, or in this case, in the feather.

My travels bring me to Hyde’s doorstep. She’s tied up at the moment, so I sanitize my hands with the automatic Purell dispenser just outside her door to pass the time. Mrs. Peck strolls in from her midday saunter and asks me if I need help. I tell her I’m in the office on a matter of school-wide importance. She tells me to have a seat instead of loitering in front of the entrance. I comply—for the sake of seeing Freddie.

When Hyde’s prior engagement exits, I linger in the lobby for a few moments, before absolutely bombarding her with my crisis regarding school-spirit upper management. Hyde gets enough of this kind of schlock from parents, you know.

She gestures me to enter, nearly hacking up a lung. I probably gave her a funny look as she promptly explains that “the Hydes have a cold.” Maybe I shouldn’t have been eating lunch with Mac Hyde. Or walking with him in the hallway. Or inhaling the same air as he was exhaling in newspaper class. Oh well. When I’m hacking up a lung, I’ll know who to blame.

I ask Hyde where Freddie Falcon is.

“He’s in storage because we don’t have a Freddie,” she says, almost in tears (I’m not sure if that’s from her emotional ties with a mascot, her cold or just the poor quality of my voice recorder).

“Do you want Freddie?” she asks. Of course I do, I say. “Freddie’s in a closet,” she says. I ask her if she could escort me to him. “Well, I’ll get somebody to take you to him. Why? Are you going to interview Freddie?” she asks rather suspiciously. I tell her that I’m just attempting to ascertain his whereabouts because he seems to be MIA.

“Let me get someone to get you there. The principal and Mr. Safine are gone and I don’t know what Mr. Cerbone is doing, but I will get you there,” she says. That’s reassuring. Half of our administrative staff is missing and I’m looking for a bird.

“I want Freddie to come back,” Hyde says. “But Freddie right now stinks. Literally and figuratively. He needs to be cleaned. So many years of blood, sweat and tears, more sweat than anything else.”

She picks up her walkie talkie. BEEP BEEP. (I haven’t used a walkie talkie since I was five, but I suppose this is a more practical mode of communication for our janitorial staff than texting during class is for my classmates.) “Can somebody get David Eng to the closet the closet behind Julie [Grenier]. He needs to see Freddie Falcon,” Hyde broadcasts.

“Meet him there in a few minutes,” a male voice echoes from the walkie talkie. As I’m leaving, I thank Hyde and tell her how cool this is. “Do you know how odd you really are? If this is cool, you’re really odd,” she says.

I’ve learned a few important things: Hyde knows my name. And now she thinks I’m odd. All in the name of Freddie, right?

I skip over to the Tech Guru/Xerox room/storage wing of the school. A mustached man driving a golf cart is waiting for me.

“What are you trying to see?” he asks. I have no clue who this guy is, but he’s probably a maintenance guy given the several keys hooked on his belt. I tell him I’m trying to find Freddie Falcon.

He opens a closet and we enter. It’s really sketchy in there, almost something out of a Scooby Doo episode like one of those abandoned nightmare houses. Gulp. I need a Scooby snack. After opening the external cobalt blue door, we must also unlatch an inner transparent door about ten feet into the room. It screeches like a banshee.

“Uh…do you see it in here?” the maintenance guy asks. I look around. Nothing by racks and racks of fluffy dresses. “Freddie Falcon…didn’t know we had a name for him,” he mutters to himself.

This rather deflating development encourages me to engage in small talk. “So, what would you be doing right now if you weren’t helping me find a costume?” I ask him.

“Well I was going to go replace a toilet paper dispenser,” he says. “Someone tried to burn one. Before that I was trying to fix some parking lot lights.” Hmm…didn’t know arson was a big problem at our school.

We continue to ruffle through the piles of clothes. I step backwards, a move which would seal my fate. I nudge the ajar creeky inner door and SLAM! It locks shut. We’re stuck.

(I know this story sounds awfully contrived, but yes, I did get stuck in a closet with a custodian in the middle of newspaper class. Weird, eh?). I realize that given the relative transparency of the door, we need only a kind gentleman to pass by and hear our pleas of salvation to be rescued.

The maintenance guy (at this point I still don’t know his name) proceeds to jam each of his keys into the lock, hoping one will work. I ask him if he actually knows which key goes with which lock. “I don’t,” he says. “I usually keep certain keys in certain places of my key ring. Master keys and stuff like that.” Obviously he doesn’t have a master key for this lock because none of them work.

“Hey Bart, this is Mike, copy,” he says into is walkie talkie. Silence. The custodian’s name is Mike, apparently. Moments pass. Maybe we’re in one of those lead-plated mouse-traps which bounce back radio waves.

After anxious seconds slip away, someone responds (presumably an associate maintenance man), “Hey Mike, he was having trouble with his radio a few minutes ago. Let me see if I can find him.”

It feels like several minutes fly by and Bart doesn’t respond.

“Hey Brian,” says Mike, resorting to another option. “Could you come over to that room where I was gonna let that kid in? We’re locked in here.” Oh. Now I’m “that kid.” I’m cool with that.

Just then a man wearing a black collared Comcast shirt (who will be affably labeled the Comcast Guy) passes by and saves us. Apparently, the creeky inner door to this closet is locked from the inside and unlocked from the outside. I’ll remember that when I grow upset with my brother and I need a spot to stash him until I graduate high school.

“Thank you for saving our lives,” says Mike to the Comcast Guy. “I was starving. I was freezing. Panic had set in.” Oh man, this guy is hilarious.

We strut over to the Tech room and share our account with the congregation (Grenier, technical assistant Spencer Sands, June Lamm from the Activities Office and The Comcast Guy). Sands tells us that he’s been locked in that same room before, but no one offers any concept of Freddie’s whereabouts.

We’ve uncovered the whereabouts of Freddie Falcon, stored in a closet labeled 805. A feeling of satisfaction rushes into my heart—I guess this is my Sherlock Holmes high of the day. I thank Mike for all of this help and return to the journalism room at 1:13 p.m., prancing with glee.

In retrospect, I sacrificed my personal well-being for something that is (for all intensive purposes) a bunny suit. Hopefully this “thrilling-tale” will inspire my reader, who has followed this account to the bitter end, to wear this sweaty mascot apparel, so I can truly find Freddie Falcon.