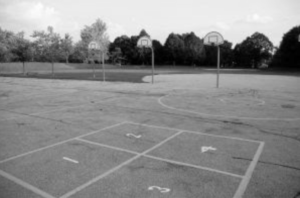 A typical four square layout at a school — surrounded by basketball courts and play structures.

On a recent visit to Argonaut Elementary School, I spotted the only thing that still felt familiar to me: the four square court. It was nothing more than a few white grid lines, empty and blank against the black top, the paint faint and flaking off. The squares were uneven, crooked and lonely; overshadowed by the animated yellow monkey bars and slender blue slides of the playground.

In the seven or so years since I graduated, both the elementary school and I have changed. The classroom colors and teacher names are different. The exhilaration of feeling tanbark between my hands or teetering on the green plastic seesaws has long faded. Running down the grassy ridge toward the black rubber swings no longer carries the same thrill that it once did.

Yet the four unassuming white squares on the pavement remain the same and hold meaning for me.

Stepping into one of them, I felt a wave of nostalgia. It brought back memories of lunch breaks spent shrieking and laughing with friends, friendships made and broken on these courts.

This monochromatic battleground has held countless rounds of four square — a boisterous handball game set up in a two by two square grid, with four players standing in each of the squares. The only equipment needed to play is a rubber ball.

One person is designated as the “king,” a role marked by a slashed line through their square. The king gets to initiate play, hitting the ball from their square into the square diagonal to theirs.

After this serve, the game begins, and each player proceeds to hit the ball into the others’ squares.

The only rule is that the ball must bounce once within the confined lines of your square before landing in the square of another player. The game ends when the receiving player fails to send the ball back in the same manner — by hitting the ball directly into another player’s square without having it bounce in their own first.

Once a player loses, the remaining players rotate squares counterclockwise to replace that person. The goal is to ascend into the king’s square — a feat done by forcing out the king.

Hitting the ball outside of the two by two court will also result in a loss. With the game revolving around lines, there were often fierce arguments between friends. We would constantly bicker over whether the ball was in or out.

Winning was like popping bubble wrap, a perpetually obnoxious and satisfying affair, while losing was putting on wet socks, unfortunate and repulsive. Typically, there was always a long line (no pun intended) of kids waiting to play, and everyone wanted to have the most playing time. I remember skipping out on lunch many times just so I could get to the black top earlier and claim the king’s square.

My most memorable four-square experience happened after school, on a particularly rainy, cold, winter day. Many students had already gone home, but my friends, Drew, Evan, Chris, and I decided to stay on campus a little longer — the thrill of playing the game was too compelling.

We ended up playing for over two hours.

By then, the rain had got so bad that it resembled hail; raindrops were hitting us like pellets, our hands muddy with dirt and sweat. The ball, normally a bright red, became subdued and maroon. The four of us were dressed in heavy coats and we looked like fat penguins shuffling on ice as we hobbled about, nudging the ball towards each other. Despite the cold, we kept playing; still smiling, laughing and shouting.

To an outsider, such dedication to a recess game seems bizarre, even ridiculous. Yet for my elementary school self, the reason that I kept playing was simple: It was fun.

Ultimately, looking back, the game of four square represents freedom for me; a pure and innocent outlook on life and the pursuit of unreserved joy.

These memories of hot recesses and rainy winter days spent screaming about lines and freely smashing a rubber ball from square to square are ones to cherish. I truly miss this carefree activity that took place on this monochromatic battlefield.