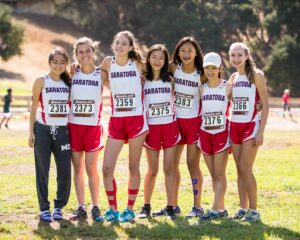 As senior Jessie Zhou jogged around her neighborhood last fall, she couldn’t help but feel a sense of nostalgia. She thought back to insufferably hot September days when she and her teammates would sprawl out across the football field after an intense cross country workout.

Zhou joined the team  during her freshman year, when her mother “forced” her to sign up in order to avoid taking P.E.

“I didn’t think I’d enjoy the sport at all because I was never much of a runner, and I was almost certain that I would drop out,” Zhou said. “However, the atmosphere and team spirit drew me in, convincing me to do cross country for all four years of high school.”

Zhou’s teammates noticed her enthusiasm for the sport and voted her for captain during her junior year, extending to the end of her senior year. When the pandemic hit, however, Zhou knew that her captain role would end earlier than she had anticipated. Like countless other seniors, Zhou’s high school athletics career fell short.

Zhou’s mother is a health care worker who works with eldery patients, and Zhou knew that she wouldn’t be able to participate on the team under any circumstances.

“I was devastated, as I had grown to love the sport over the past three years and had formed such strong bonds with Coach (Danny) Moon and my teammates,” Zhou said. “I was really looking forward to my final season, and I miss that positive energy so much.”

Although Zhou did discover a passion for running through joining cross country, the spirit of the team was what encouraged her to give her full effort to each practice and meet and apply for a captain position.

According to Zhou, coach Moon continuously reinforced his philosophy that joining cross country was not necessarily to win and be the fastest person on the track, but to find a genuine love for running. This fostered an incredibly supportive and motivational environment where each runner pushed the team to its full potential, Zhou said.

Although Zhou will not be pursuing cross country in college, she cherishes the opportunity she had to discover a new passion and explore new friendships in such an uplifting atmosphere.

“Everyone genuinely loved coming to each practice, and despite missing out on my final year of cross country, I’m so grateful for the amazing teammates and memories along the way,” she said.