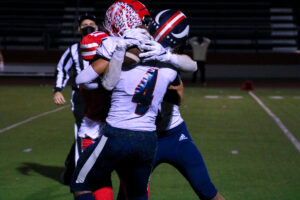 Permalink
The Falcons beat Lynbrook 11-6 in the final game of the season.

In the last football game of the season at home against Lynbrook on Nov. 4, the Falcons’ defense held fast, securing an 11-6 win.

Senior wide receiver Seth Hulme scored a touchdown followed by an extra point. After a couple of defensive stops, senior wide receiver Nathan Lim kicked a field goal. Some sloppy defense by the Falcons allowed for Lynbrook to score a 10 yard pass giving Falcons a 11-6 lead by the second quarter. While the two teams fought against each other in the following two quarters, no more points were scored.

It was an emotional senior day for players, and the Falcons were delighted to get the win to cap off a tough season on a high note.

“All the seniors, juniors and even sophomores were just crying,” said senior wide receiver and captain Max Timmons. “It just shows you how much work we put into the season and how much this team meant to us.”

This year, the Falcons ended with a division record of 1-6 and an overall record of 3-7, placing 7th out of 8 teams in the Peninsula Lake Division. In particular, junior quarterback Shane Timmons stepped up and threw for 22 passing touchdowns and ran two rushing touchdowns during the season, playing in every single game. He ranked 6th out of 100 quarterbacks in the California Central Coast Section with his 1946 passing yards.

Despite the losses and the injury-caused forfeit against El Camino due to a lack of players, Timmons said this season was one of the best in recent years for the Falcons.

“We had some close losses,” he said. “It’s not what we wanted but to say the least, it was a lot better than last year and we just formed this really tight bond with all the teammates.”

The team lost close games against Fremont and Mills with scores of 42-36 and 30-28 respectively, and fought hard against Woodside but lost 64-34, the best team in their division. However, their brotherly mentality and a tight union between every single player as well as an unwavering passion for football, outweighed their frustrations over scores, Timmons said.

“We’re a family, and it’s not like the record is really indicative of how well the season went because honestly, it was just so fun,” Timmons said.

Despite their stronger performance this year, and great team spirit, Timmons said that they could have done better if more athletes were on the team.

“There’s only about 25 players,” he said. “There’s five juniors on the team, mostly seniors and a few sophomores. I know we could have more juniors, but more people just need to come out. Football is really a game in which teams have strength in numbers, but nonetheless, we managed.”

Similar to last year, the team was slowed by the numerous injuries their members sustained. Looking beyond this year, though, Timmons voiced his appreciation of the memories formed with his teammates.

“I’m just so thankful that I was part of this team. The experiences I’ve had are ones that I’ll never forget,” he said.