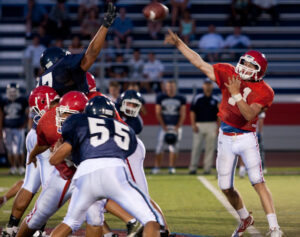 There were no drives, as each offense unit took a single snap from the 50-yard line before switching off. Each defensive unit stayed on for five plays, matching up against both teams.

Although merely a test session to work out the kinks for their game, the scrimmage featured the atmosphere of a normal game with raucous cheering.

Senior running back Grant Thomas heard much support subsequent to scoring the lone touchdown of the night, a 50-yard run through the teeth of the Leigh defense after breaking many tackles. Senior quarterback Vincent Carstens contributed with several pass completions.

The Falcons hope that the scrimmage helped them prepare for their first game of the season against Santa Theresa High on Friday, Sept 4.