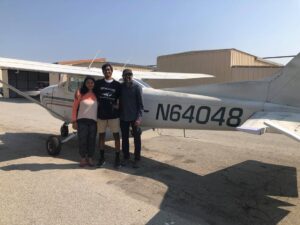 “Hollister TFC, Skyhawk six-four-zero-fife-niner, left downwind for runway one-four, Hollister,” said Omkar Kulkarni, Class of 2021 alumni and current freshman at the University of Illinois at Urbana-Champaign (UIUC). Kulkarni, a rookie pilot, was informing nearby pilots about his takeoff.

As Kulkarni pulled the flap handle, the nose of the plane tilted to face the sky and the landing gear left the ground.

In early July, Kulkarni began taking online courses and in-person flight lessons at the South County Aviation flight school in San Martin, with his coach Bailey Schroeder. After a month of flying, on-the-ground training and online lessons, Kulkarni successfully finished three 7-minute consecutive solo flights on Aug. 14, a milestone in his pursuit of this unique activity.

However, learning to fly as an 18-year-old did not happen overnight. Over the summer, Kulkarni and his sister, junior Maithili, received their scuba diving certifications near San Francisco Bay — an experience that Kulkarni did not particularly enjoy. During that trip, Maithili found her passion for diving, making Kulkarni feel pressured to find something for himself. He took inspiration from his dad’s 60+ hours of flying experience on the East Coast as a graduate student at Princeton.

“A lot of people use the word ‘passion,’ but it was more like a ‘curiosity,’” said Kulkarni.

Kulkarni and his family went on a discovery flight above the beaches of Santa Cruz, where they met Kulkarni’s future instructor Schroeder, who led the flight. Kulkarni was given a brief opportunity to control the plane himself.

“When [Omkar] got in the plane, he was literally just sitting next to the pilot, not even doing anything yet. He was already so excited. You could see the sparks,” said Mailthili. “Every single time he’s up there, he really, really enjoys it.”

In order to fly solo, Kulkarni finished 30 hours of fundamental training, which included learning the terminology used in communication with other pilots without the aid of a control tower. He also received evaluations from his coach, officially acknowledging that he was qualified.

Fully immersed in this thrilling sport and motivated by Schroeder’s encouragement, Kulkarni is planning to continue his flight lessons at the Parkland College of Aviation and fly out of Willard Airport near UIUC.

“If I was to have learned flying in high school, I could have gone even further, but I have no regrets,” said Kulkarni. “I am grateful to have the opportunity to fly in California weather and now in Illinois.”