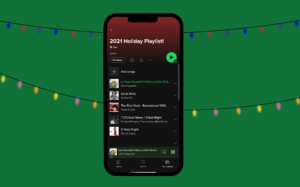 The holiday season is rapidly approaching, and with it comes the annual flood of pop singers releasing covers of classic Christmas songs. While there are some wildly successful and iconic Christmas albums like Bing Crosby’s “White Christmas” and Mariah Carey’s “Merry Christmas,” most holiday releases simply add to the indistinguishable clutter of overdone Christmas carols.

Despite the overflow of mediocrity that typically accompanies the Christmas Creep (a phenomenon where retailers and radio stations are taken over by Christmas-themed content in the weeks leading up to the holiday), there are some true gems that have made their way into my heart and onto my Spotify playlist — a mix of iconic originals and stunning covers, mostly characterized by excellent vocals that will elevate any listener to a state of pure bliss.

But how does one distinguish the few good songs from the many bad ones (I’m looking at you, “Under the Mistletoe,” Justin Bieber’s atrocity of an album) — to curate a good playlist? That’s precisely what this list is here to help you with. Here are my top five favorite timeless Christmas cover songs (in no particular ranking).

“Have Yourself a Merry Little Christmas” by Ella Fitzgerald

The “First Lady of Song” has never failed to disappoint, and her 1960 holiday album “Ella Wishes You A Swinging Christmas” is the epitome of high-quality Christmas music. This track in particular stands out because it shows off Fitzgerald’s beautiful vibrato and range. Though it contains none of her signature scat singing, the song is simple and pure. The suspended notes in Fitzgerald’s crystal-clear tone are complemented by soft trumpets and saxophone. The original version by Judy Garland is a good listen as well, but Fitzgerald’s cover remains unparalleled — the simple elegance makes this song a Christmas staple I can listen to over and over again.

“The First Noel” by Frank Sinatra

Frank Sinatra’s deep, golden voice is accompanied by a chorus of soft backing vocals that add richness and depth to the song. Rising in beautiful crescendos, the harmonies are at the forefront of the song. Although the track is short, emotions swell with every drawn-out “noel” in the song. The song is from his 1957 album “A Jolly Christmas with Frank Sinatra,” a trove of evergreen holiday songs. “The First Noel” evokes a sense of warmth in the listener — as uncomplicated and slow as the melody and lyrics may be, Sinatra’s vocals coax out the beauty of the hymnal carol and polish it until it shines.

Most people might wish for world peace, AirPods or new clothes for Christmas. Eartha Kitt, however, asks Santa for a yacht: a light blue ‘54 convertible with? a duplex. While this isn’t actually a cover — Kitt released the original in 1953 — I had to include it on this list. Kitt flirts with Santa through her playful and provocative lyrics, masked by her delicate vocals and misleadingly demure tone. It’s unconventional for a Christmas song but the tantalizing tune grows on you quickly. Above all, Kitt conveys a very important reminder to her listeners: Always keep your expectations high when it comes to gifts.

It sounds like Phoebe Bridgers’ quiet, silvery voice harmonizing with Fiona Apple’s powerful one amidst a backdrop of a simple guitar and disturbing news reports. Never straying from the straightforward melody, the vocals form an angelic, ephemeral chorus. With their clever and emotional take on a song that is a staple in the repertoire of carolers, Bridgers and Apple create a muted space filled with a sense of familiar dread and nostalgia. They make a quiet statement through their music, jolting us with agitating news but at the same time, letting the song remind us that things will be alright. After all, isn’t that what the comfort of the holidays is about?

It goes without saying that no holiday playlist is complete without at least one Mariah song. For a lot of people, it’s the iconic “All I Want For Christmas (Is You),” but for me, the staple Mariah Carey song is her Whitney Houston-esque rendition of “O Holy Night.” Set to a simple instrumental background, Carey’s ethereal vocals take center stage.

The song begins with a stunning showcase of her underrated lower register. The immense control Carey holds over each syllable as she wanders up and down the octave in a single breath will never fail to impress. She finally reaches her characteristic pitch change, belting and whistle-notes, with the same pristine control until the end of the song, leaving any listener in awe. The song is masterful in transforming an old French carol into a powerful display of raw talent and emotion.

There you have it — my five favorite Christmas songs. Now that you’re done reading my detailed reviews of each one, you have zero excuses to have a bad Christmas playlist. It’s time to put those earphones on and enjoy the best music that the holiday season has to offer.