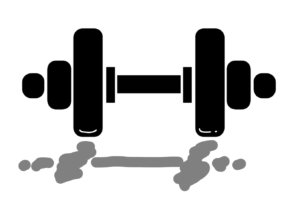 Liu, a co-president of the club along with Bhandari and a guard on the SHS basketball team, came up with the idea to start the club during the summer after seeing the benefits of developing a consistent workout schedule. He said he thought it would be easier for students to form a schedule if they were part of a group of other motivated students.

“We wanted to create a community to allow others to create connections during their fitness process,” Liu said. “Not many people feel motivated to work out by themselves. However, with the fitness club, they can workout together online in groups and attend workout challenges with peers.”

Liu and Bhandari noticed that most of the clubs at SHS were generally academic-based, and they wanted to create a club that explored a different aspect of student life.

“We wanted to not only inspire others at SHS to become more fit, we also wanted to create a new lifestyle around the Saratoga community,” Liu said.

Like Liu, Bhandari plays for the SHS basketball team and was immediately hooked by the idea. Getting the club approved however, was a different story.

According to Bhandari, the fitness club was initially rejected for several reasons, including a lack of interest, insufficient experience and liability issues if a student were to get hurt performing their exercises. However, upon their reapplication, they had addressed all these issues and were approved.

“We sent a form to people asking if they would be interested in joining, we got Mr. Ellis as a new adviser, and we created a form to fix the liability problem,” Bhandari said.

To follow social distancing guidelines, all meetings are held through Zoom. Currently, the fitness club hosts Zoom meetings once every week on Tuesday from 1 p.m. to about 1:20 p.m. The Zoom link is accessible through their Instagram account bio and their Discord server.

Junior Ashlyn Pham has attended every one of their meetings so far; she sees the club as a way to not only learn and connect, but as a successful cultivation of fitness culture.

“It’s pretty positive and most of my friends are a part of the club,” Pham said. “It’s helpful to be surrounded by kind people because the members are all really friendly!”

Despite starting during virtual learning, Bhandari said the fitness club has run smoothly. The online meetings consist of quick lessons on certain muscle groups and brief descriptions of workouts to strengthen them.

The club is also hosting an ongoing competition in which members send videos of themselves performing the workouts detailed during meetings.

“They encourage us to work out by competition which, in my opinion, motivates students more,” Pham said.

Points are awarded based on the number of workouts sent in, and at the end of the semester, the person with the most points gets a gift card.

“Everyone is welcome at the fitness club,” Liu said. “People might be scared to join us because they think everyone is already huge and bulky, but that’s not true; there are many people just like them: starting from scratch.”