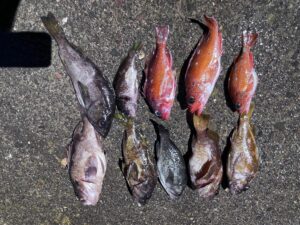 Photo by Jonny Luo
A photo of the fish my family caught. Five of them are mine, although I’m not sure which ones.

Permalink
Although I only caught five tiny fish in three hours, it felt amazing to pretend to be a stone-age hunter-gatherer “livin’ off the land (water).”

On a Saturday in late August, you would have found me in the most unlikely spot: standing on a rocking boat in the ocean while holding a little metal stick with a bit of string attached to it. I was fishing.

My older brother has begged my dad to go on a fishing trip for his entire life, and after years of my dad dragging his feet, my brother decided to take matters into his own hands and organize the trip himself.

At 4:20 a.m., my alarm clock blared, disrupting the otherwise peaceful autumn day. Thankfully, I vanquished the alarm clock with my almighty finger and managed to sleep another three minutes until someone rudely turned the lights on and woke me up for good. That someone was my dad, who as I will once again remind you, did not organize the fishing trip.

In penance for not organizing the trip, or perhaps not trusting my brother to drive, my dad drove us to a dock in Santa Cruz, where we boarded a ship called The Velocity. Despite its name, the ship didn’t reach more than 15 miles per hour at full speed. A lazy boat for a lazy sport.

And the worst part was that we arrived an hour early! They told us to arrive at 5:30 a.m., but the ship didn’t actually leave until 6:30 a.m. I sat in the car for a solid hour doing nothing, and only went outside to see the sunrise before realizing that it was so foggy that we couldn’t actually see the sunrise (much like the senior sunrise, feels bad man).

I didn’t really expect to catch many fish; however, thanks to my ability to catch all the fish in the sea (wink), I actually ended up catching five! The voyage started off with a brief introduction on how to fish by two of the deckhands — which, I admit, was not as simple as I anticipated.

There was a weight at the bottom of the fishing pole made out of lead (yay, I love poisonous metals!) and since we were fishing for rockfish, people’s lines sometimes got stuck at the bottom: It was our lovely contribution to ocean waste.

In part due to the small bait and hooks we used, I couldn’t really feel a tug when a fish bit my rod, so I spent a lot of time furiously reeling up my line. Sometimes, the bait was still there, and sometimes it wasn’t, meaning a fish bit but I just couldn’t feel it.

Occasionally, I caught fish just by randomly reeling in the line. In other instances, I caught them when I felt just a slight tug. Afterwards, I had a very fun time pulling them off the hook and sticking my finger in their mouths to put them in a burlap bag where they could suffocate to death. It sure sounds like fun for the fish. Most of the fish didn’t even struggle.

Fishing turned out to be more boring than I imagined. I saw myself fighting the fish to reel them up and bringing home a 2-footers with a heroic effort, but the reality unfortunately did not meet my expectations.

At the end, the deckhands offered a service to filet people’s fish, and I enjoyed watching them toss the carcasses into the ocean, because of the spectacle afterwards: tens of seagulls swarmed over and fought each other for carcasses like it was the Hunger Games. It perfectly exemplified a symbiotic relationship: The seagulls provided the entertainment, and we provided the food.

All the fish I caught were no bigger than 8 inches. After my fishing trip, my dad taught me how to descale and clean fish, which was really fun, although I didn’t do a particularly good job — my brother said some of the fish tasted like fish stomach. We caught a total of 10 fish and ate all of them.

If you, dear reader, ever want to go fishing, take two pieces of advice from me: Take an anti-motion sickness medicine (I used bonine) and prepare to be thoroughly bored.

I tend to love stereotypically boring tasks like puzzling, but even so, fishing was just too boring for me. I don’t think I’ll ever go fishing again, but on the bright side, I didn’t throw up. The same thing can’t be said for some others on the fishing boat.