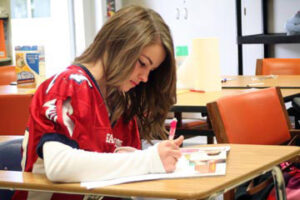 The issue of whether finals should be before or after break has been a topic of debate in the past. As of now, finals are in mid January, leaving plenty of time over the break to review. Although the current finals schedule allows much time for studying, reading textbooks is no way to spend the holidays. The point of a break is to give students time away from stress and provide an opportunity for kids to do activities completely unrelated to school.

Students who wish to use the break to review should consider how much time they actually spend studying during the holidays. In many cases, students spend this time stressing over the studying they have to do but never getting much work done. Rather than worrying about finals during the break, students should be able to get them over with beforehand, during the last week before winter break.

Although having two extra weeks to study may seem appealing, it may not be the best option. Information can be forgotten in a matter of days if a student does not continuously review. With so much time over the break, students are bound to forget more than they can study.

Several teachers have begun moving their finals to before the break, splitting the final over two block days. Not only does this option give students a break from the class, it also reduces the stress that comes with finals. Having a split final gives it the length of a regular test, so students are not as pressed for time. Both teachers and students are able to enjoy the break, and teachers start the new year with second semester and begin teaching new material.

One of the most fundamental traditions of holiday times can easily be forgotten if students feel the need to review over break. Studying can get in the way of spending quality time with family, time that is often very rare and limited. By leaving two weeks free of work, kids will have a much deserved break to unwind and prepare for a new year.

Another benefit of moving finals to before break would be to change the schedule of the year. The school year would start earlier to finish first semester before the year ends. Starting second semester at the start of January will leave more time for preparation before AP tests, and school would end earlier in the spring.

Several local schools, such as Lynbrook and Monta Vista, have already moved their finals before break. With numerous teachers also making the transition, it is definitely an example worth following.