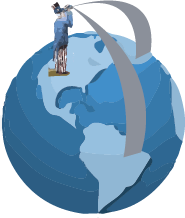 In the upcoming years, climate change and foreign diplomacy should be at the center of U.S. political policies.

Fires rage across the West Coast while hurricanes pummel southeast America. Colorado and the Rockies saw 80-degree temperature drops within a day, moving from blinding heat to snowfall. Climate change has reared its head, and the U.S. is feeling its effects more than ever.

Meanwhile, the Trump administration has made blow after blow to foreign policy: withdrawing from the UN human rights’ council, banning Muslims from certain countries, inflaming tensions with North Korean and Iranian leaders and starting a trade war with China, among many others. On just his first day in office, Trump signed an executive order pulling the U.S. out of the Trans-Pacific partnership.

At such a critical period in history, America has fallen far behind in global fights, becoming a liability rather than the superpower and moral leader it used to be. During the fourth industrial revolution, when technology is allowing for faster communication than ever before, the U.S. has decided to shelter itself from the benefits of working with others.

As 2020 progresses and a plethora of issues plague the U.S., there are two critical problems a Biden presidency, if it happens, must prioritize — climate change and foreign diplomacy.

The urgency of climate change

The U.S. is the second largest producer of greenhouse gas emissions. America needs to take the lead on reducing this, keeping check with global deals ensuring other countries that it will do its part. If the U.S. maintains the current measures, the carbon emissions will drop by only 4 percent from 2019 to 2050. Re-entering the Paris Climate deal, on the other hand, would ensure that the U.S. keeps up to global standards and holds itself accountable for its production in the coming years.

To meet the Paris Climate deal of keeping global temperature rise below 2 degrees Celsius this century compared to the temperatures of preindustrial times, the world needs to reduce greenhouse gas emissions by 7.6 percent every year starting now. The global temperature (as of October 2019) has already risen by 1.1 degrees celsius, according to a report by the World Meteorological Organization.

In the coming years, strict policy has to be implemented. This includes harsh regulations on fracking to reduce its harmful methane production, shifts toward clean energy cars by enforcing tougher mileage standards and re-entering the Paris Climate Deal (if the U.S. follows through with its current plan to withdraw).

Fracking, although cleaner than coal, prevents the shift to renewable energy sources, and only reduces carbon emissions in the short run. In addition, the mechanisms companies use to frack create harmful byproducts in the air and water, harming those in the vicinity of sites. Regulations need to fully protect vulnerable communities while encouraging the shift towards cleaner energy.

Among the U.S. carbon emissions, transportation is the single greatest contributor. Putting stricter laws on vehicles will help address this issue, lowering the carbon footprint.

America is no longer in the position of political power where its alliance is undoubtedly valuable. More than ever, America relies on its East Asian allies, whose loyalty is torn between the technological and economic benefits of siding with China and the security that America promises. The unpredictability of the U.S. government, however, pushes East Asian allies away from relying on security in the long run. Especially considering the U.S.’s association with Russia and its talk about leaving NATO, siding with America is even more of a liability.

To globalize, the U.S. needs to reaffirm its investment in other countries through foreign aid and trade agreements. By creating economic ties with other countries, the U.S. will have some holding to back their promises, making them more trustable.

The U.S. also needs to make allies by aiding other countries. Currently, only 0.18 percent of its GDP on foreign aid, far behind the 0.7 percent goal met by countries such as Sweden, the United Kingdom and the Netherlands. Spending money in developing countries helps to gain well-needed consumer markets that other countries (often in the European Union) are spending billions of dollars investing in, while also providing the U.S. with allies.

In addition, rather than connecting with the developing markets in Africa, Vietnam and India, the U.S. has increasingly slowed international trade in favor of domestic development. While this is an honorable idea, it ends up harming U.S. tech companies and the overall GDP, which would benefit from mutual trade and resources.

To reverse this trend, America should end the trade war it has with China and open up more to foreign trade. It should stop worrying about the trade deficit, a meaningless value that gives little indication of the overall GDP and employment climate.

If the U.S. does not act soon to address these two critical issues, it will lose its place as the most powerful country in the world. If it does not, the center of world influence will shift, leaving the U.S. far behind.