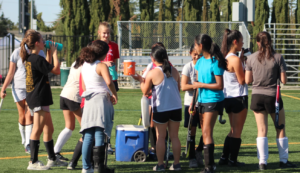 Permalink
The athletes are working hard during their practices to qualify for CCS.

Recap: The team had a small roster of only 12 players after losing players to other sports while seasons overlapped last spring.

Players have been enjoying being back on the field, hosting bonding events such as secret buddy exchanges at meets and having senior night.

Senior co-captain Rima Christie said that the main difference between this season and last year’s season is that masks are no longer mandatory during games. Masks hindered player performances last season, making outdoor games much more difficult and tiring.

Last season, there were only 12 players on the team, due to COVID-19 and schedule conflicts with other sports. This year, the team has seen a rise in participation, and the JV team is much larger than previous seasons.

“We have a lot of seniors so there’s a lot of maturity and leadership exemplified within our team,” senior co-captain Nandini Desai said.

The team has been working hard for the past month to make the most of their preseason through completing conditioning and drills every day for two hours.

The team’s goal this year is to make the playoffs and win CCS. When the actual season starts, the team is going to have roughly two games a week with practices on every other day.

Although the team has had challenges with chemistry on the playing field and figuring out positions suitable for players, they are all committed to having a successful season and working hard.

“Our team is coming together really well, and we definitely do our best to make everyone feel comfortable,” Desai said. “Our team isn’t that big, which is really nice to just bring everyone together.”