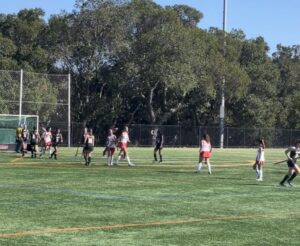 Photo by Emily Ta
The team played their hardest against Mitty on Sept. 13, but ultimately lost 7-0.

Permalink
The team is striving to build chemistry and a strong sense of community through interactive strengthening practices.

Recap: The team performed better than their previous season, making it to the second round of CCS, with their winning streak ending after a loss to Leigh.

The field hockey team is focusing on improving practice techniques to prepare for intense matches after moving up to the more competitive upper division this year.

Going against tougher competition to start the year, the Falcons lost 7-0 against Archbishop Mitty on Sept. 13,  2-1 against St. Ignatius on Sept. 15 and 8-0 against Saint Francis on Sept. 20.

Jatin Sharma is coaching the Falcons this year. Last year, he worked alongside Nanu Sidhu as head co-coaches, but she has since moved away. Nonetheless, senior center midfielder Georgia Adams noted the practices and drills remain similar.

Adams added that the team is working to gradually increase the difficulty of practices and conditioning without overworking players.

Following tradition, the team has been dedicated to ensuring players have strong connections and trust through team bonding activities, occasional boba runs or after-practice dinners.

The team’s main goal is to maintain good chemistry on the field and ensure players are focused at all times. Since the team is in a new league this year, many are stressed about games against strong teams like Los Gatos and Palo Alto. However, Adams hopes that the team will remain optimistic and energetic throughout the season.

“This season will be what we decide to make it,” she said. “We can either put in a lot of energy and look at it optimistically or we can concede defeat before it even starts.”