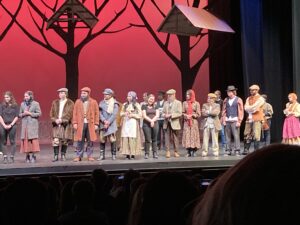 Photo by Christopher Chen
Seniors at the front of the stage prepare to take a bow after the show has concluded.

drama
With COVID-19 and a cold dubbed the “Fiddler Flu” plaguing the cast and orchestra, students relied on understudies and recorded music.

This year’s school spring musical, “Fiddler on the Roof,” ran a total of five performances, with back-to-back shows on April 29 and 30 as well as May 6 and 7. The play follows the milkman Tevye (senior Taylor Zhou) and his three daughters — Tzeitel (junior Anastasia Ramirez), Hodel (senior Peilin Zhang) and Chava (freshman Diya Iyer) — and their marriages, set in Russia that’s becoming increasingly hostile against ethnic Jews.

This year’s production ran into several hurdles related to illnesses. The actors for Lazar Wolf (junior Eugene Chow) and Fyedka (senior LJ Trueba) caught COVID-19 and their roles were performed by understudies seniors Jack Bulas and Vincent Avila, respectively, who were able to quickly adjust to their new roles.

“The understudy who performed as character Fyedka learned all his lines and blocking for the part within the span of two days,” said senior Leslie Robinson, who plays a bookseller. “He did a great job. It was impressive and a big help to the show.”

Avila said stepping up as an understudy and memorizing the lines of Fyedka was a bit difficult but worth it as he “had so much fun.”

Additionally, the musical’s pit orchestra, which played live music pit below the stage on the first weekend, was unable to perform the second weekend as well due to a cold dubbed the “Fiddler Flu” by students. Drama director Benjamin Brotzman had to quickly adjust by using pre-recorded tracks, entrusting assistant director senior Samantha Weisner with the smooth operation of the show.

“We had less than 24 hours notice to fill one role, in particular. We walked them through blocking before the performance and I trusted Samantha to do so since my responsibility had grown to new levels,” he said.

“I came in not exactly knowing what to expect, but I was very pleasantly surprised,” she said. “I had no idea so many amazing singers were in drama, and they were very energetic and entertaining through the entire show. If someone hadn’t told me there were understudies I wouldn’t have noticed at all.”

According to Avila, they saw the highest turnout for closing night on May 7, although both the cast size and audience size were still smaller than in pre-COVID years, Brotzman said.

Despite unfortunate circumstances, the cast was able to quickly adjust, and the students were pleased with their final performances.

“I think the acting was really phenomenal as well as the choreography,” co-stage manager sophomore Arushi Maheshwar said. “You could really see people enjoying the choreography while dancing.”